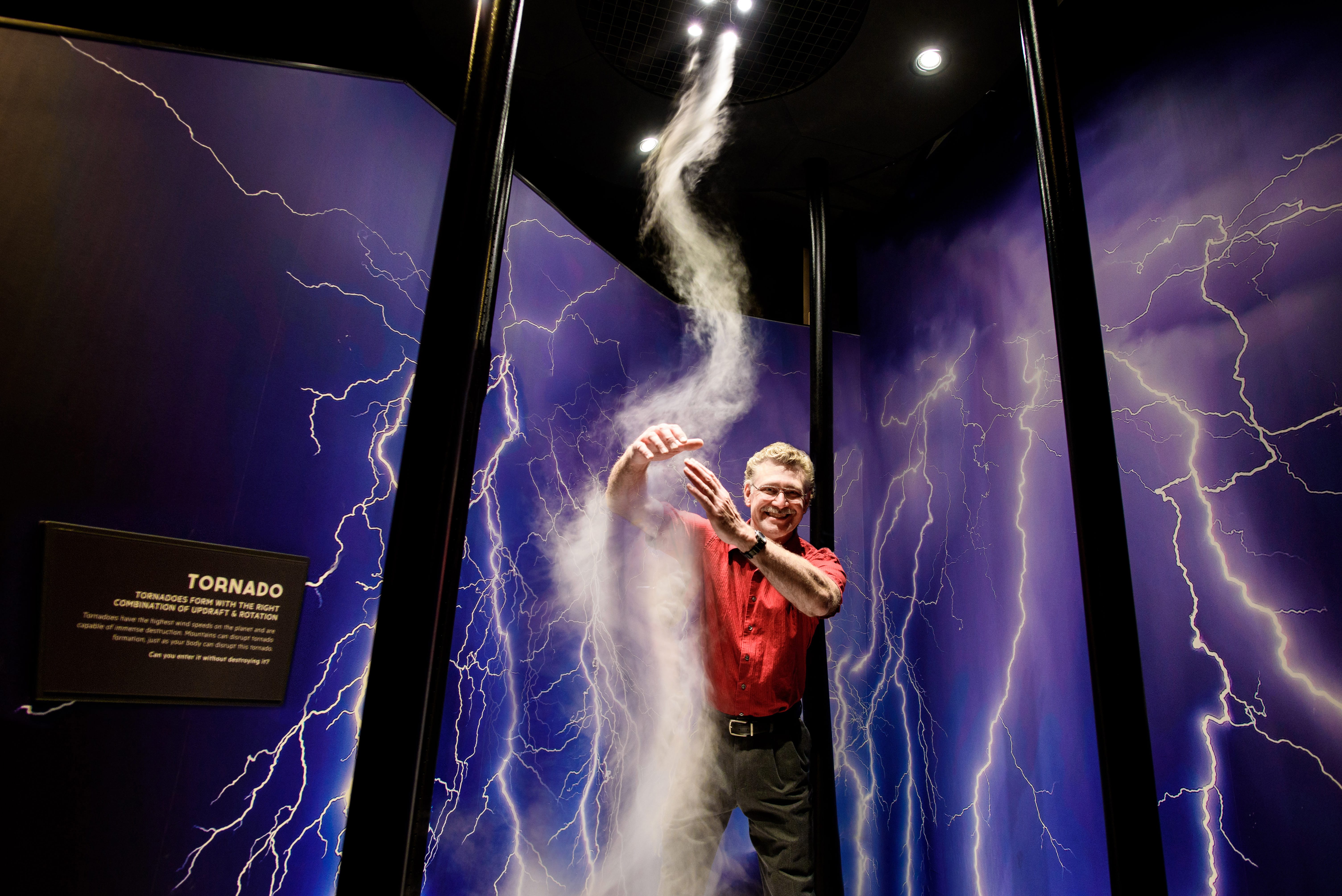 The Minds Behind the Magic

“I don’t have any numbers to back this up, but I would bet that Salt Lake City has one of the highest numbers of museums per capita in the country,” speculated Clark Planetarium Education and Exhibits Manager Durand “Duke” Johnson as toddlers and tweens bobbed and weaved around him on a typically busy afternoon inside the planetarium’s gallery/lobby space. But as anyone who’s visited one knows, a museum is only as relevant as its exhibits.

Here we introduce you to the people who make relevancy happen at three of downtown Salt Lake City’s most enduring museums: the Utah Museum of Contemporary Art, Discovery Gateway Children’s Museum and the Clark Planetarium. 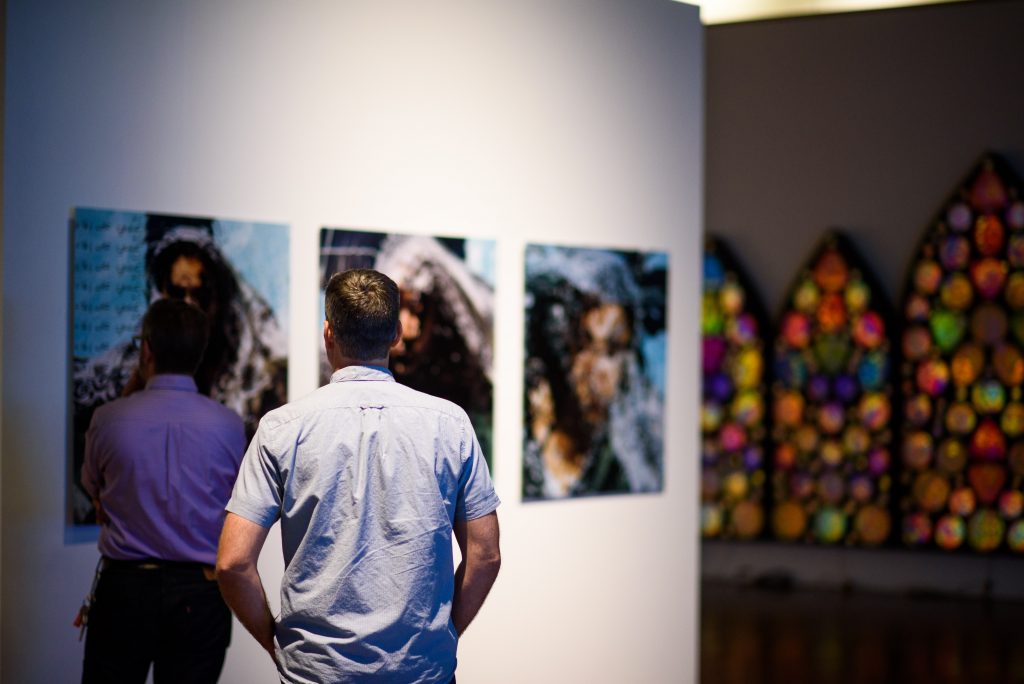 “Like most recent MFA sculpture grads, the first job I took after earning my degree was in construction,” said Jared Steffensen, Curator of Exhibitions at the Utah Museum to Contemporary Art, jokingly. “In all seriousness, it actually felt really good to get back to a place where I was making functional things after being in school so long.”

As it turned out, the building skills he learned while remodeling bathrooms and kitchens came in handy when, in 2012, Steffensen joined the staff at UMOCA as curator of education. “My first big task was building the artist-in-residence program, which included everything from fleshing out what the program would be, to physically constructing the spaces [in the museum] where the resident artists work,” Steffensen said. The result is a program that not only provides resident artists with a rent-free space to create their work, but gives them opportunities for higher visibility both inside and outside the state through professional development workshops, special access to visiting artists and curators, and exhibition opportunities. 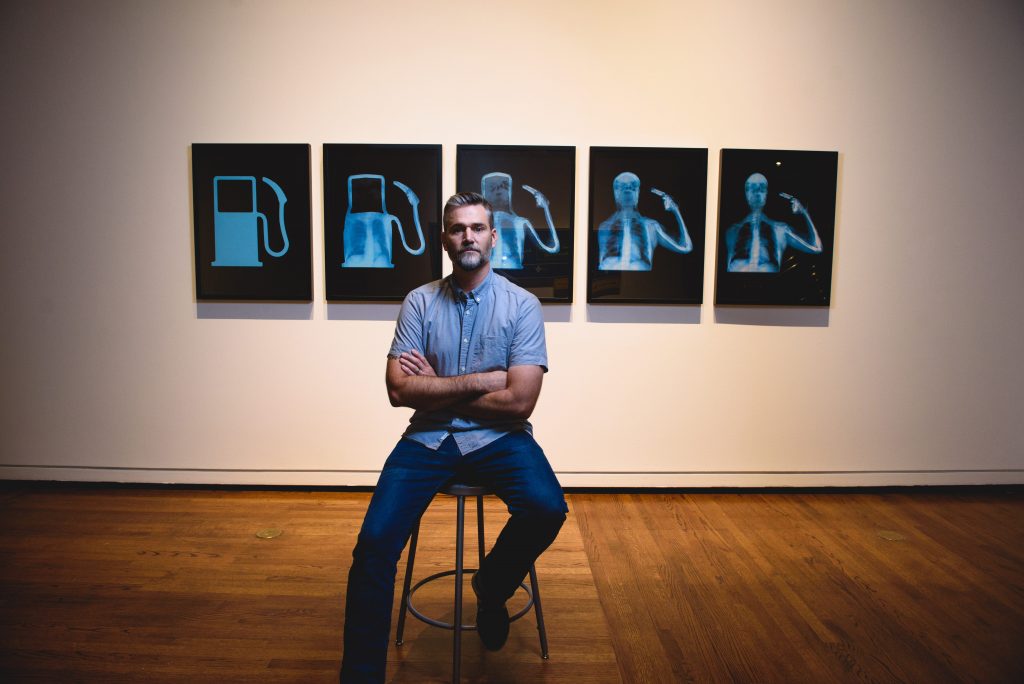 “When I finished my undergrad, the opportunities for working artists who made work like I did were so few and far between, I thought I’d probably leave Utah and never come back,” Steffensen said. “This residency is about creating a community for artists here and hopefully elevating the profile of that community nationally.”

Steffensen’s UMOCA job description shifted from education to curating exhibits last October, but the overarching mission of his work—making conceptual art part of the larger conversation—has remained virtually the same.

An exhibit on display at UMOCA now through January 6 that embodies that mission is “Cities of Conviction,” a collection of contemporary art by Saudi Arabian artists. Steffensen curated the exhibit to highlight work that delves into issues common to both Utah and Saudi Arabia, such as the struggle over natural resources, pilgrimage and the tension surrounding commercial development around cultural heritage sites.

Steffensen began developing the concept for “Cities of Conviction” at the suggestion of Dan Mills, director of the Bates College Museum of Art, and Stephen Stapleton, founder of Culturunners, an organization seeking out ideologies common to both the United States and the Middle East. At the same time, UMOCA is also hosting its first international artist-in-residence, Balqis Al Rashed, a conceptual artist and designer born in Riyadh, Saudi, and raised in Beirut for 16 years. While in residence, Rashed is working on “pieces that focus on the creation of meanings, practices, and dichotomies in respect to the collective, identity, and the self.” Her work is featured as part of “Cities of Conviction.”

“We feel this exhibit really hits the mark of making conceptual art part of a bigger conversation while creating a place for a largely misunderstood community to have a voice at the same time,” Steffensen said.

Over at Discovery Gateway Children’s Museum, Senior Manager of Creative and Exhibits Travis Reid’s easy manner and deliberate speech are indicative of his north-Texas roots. “I was born and raised in Dallas where we like to say ya’ll quite a bit,” Reid said with a grin. After earning a BFA in sculpture and then an MBA in project management, Reid took a position in his home state with Billings Productions. There he designed, developed and delivered exhibits to museums throughout the country. “I got to come to Salt Lake City when I worked on a dinosaur exhibit for the Hogle Zoo and thought it was so beautiful here,” he said. And then in April 2017, when his current position opened at Discovery Gateway, Reid jumped at the chance to move to Utah. “I’ve always been attracted to the idea of learning through play, and so this job has felt like an ideal fit for me,” he said. 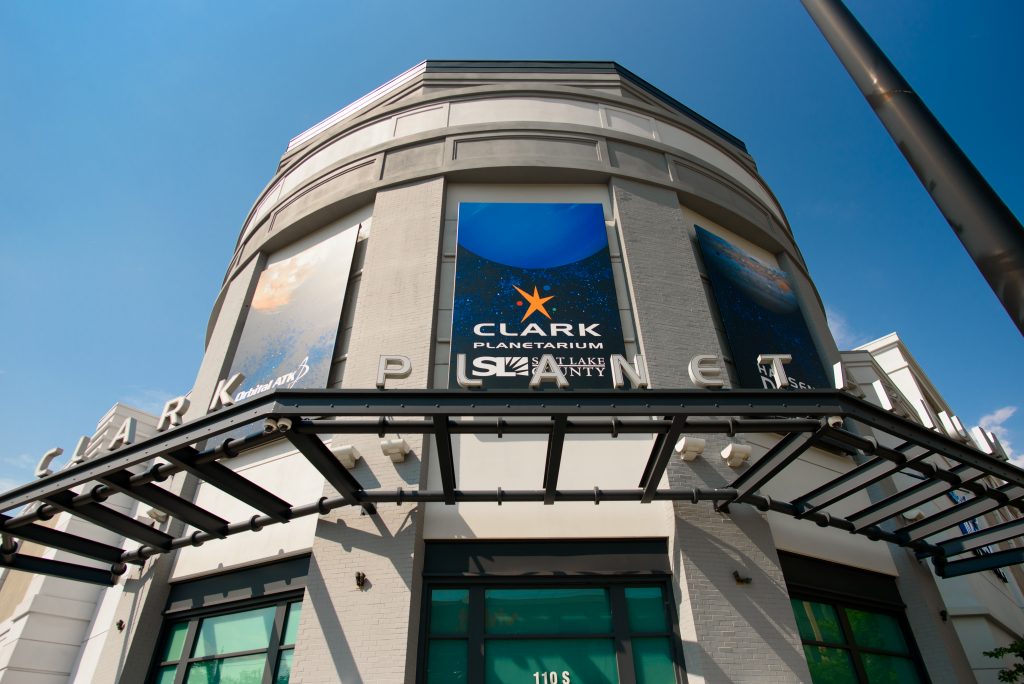 Part of Reid’s vision for Discovery Gateway is a focus on interaction and use of technology. “The smartphone was yet to come on the market when this museum opened [at the Gateway] 10 years ago. There’s been a boom in technology since then. The possibilities available now to create even better exhibits are endless,” he said. To address this goal, Reid is embarking on a thorough inventory of existing exhibits to help him formulate a long-view plan for improvements and new exhibits. “I want to find out what’s working and why, and focus our efforts on a kid’s perspective,” he said. The yardstick he’ll use to critique Discovery Gateway’s existing exhibits will, of course, include the gold standard for interactive museum exhibits: how appealing it is to multiple users, does it result in multiple outcomes, and can it be accessed from multiple sides, among other parameters. But Reid also plans to focus on the larger, thematic picture by analyzing how the museum’s different exhibits draw children through the entire space. “I believe that museums across the US now incorporate and recognize the benefits of using hands-on interactive exhibits, which was always a key design feature of children’s museums.” Reid said.

And while Reid looks forward to working with the museum’s staff to make Discovery Gateway’s exhibits even better (“Everyone here—from the graphic designer to our on-site carpenter to the development, and marketing departments—works really hard to bring every exhibit to life. It’s very much a team-oriented atmosphere,” Reid said.), several new experiences are already in the pipeline, with rollouts planned to coincide with the museum’s 40th anniversary in the fall of 2018. Those new exhibits include a refurbished and updated Water Play exhibit and a new climbing-based activity in the museum’s Garden gallery. “I’d love to create something that allows kids to experience that gallery using gross-motor and decision-making skills, ultimately being rewarded with seeing the museum from a unique viewpoint,” Reid said. 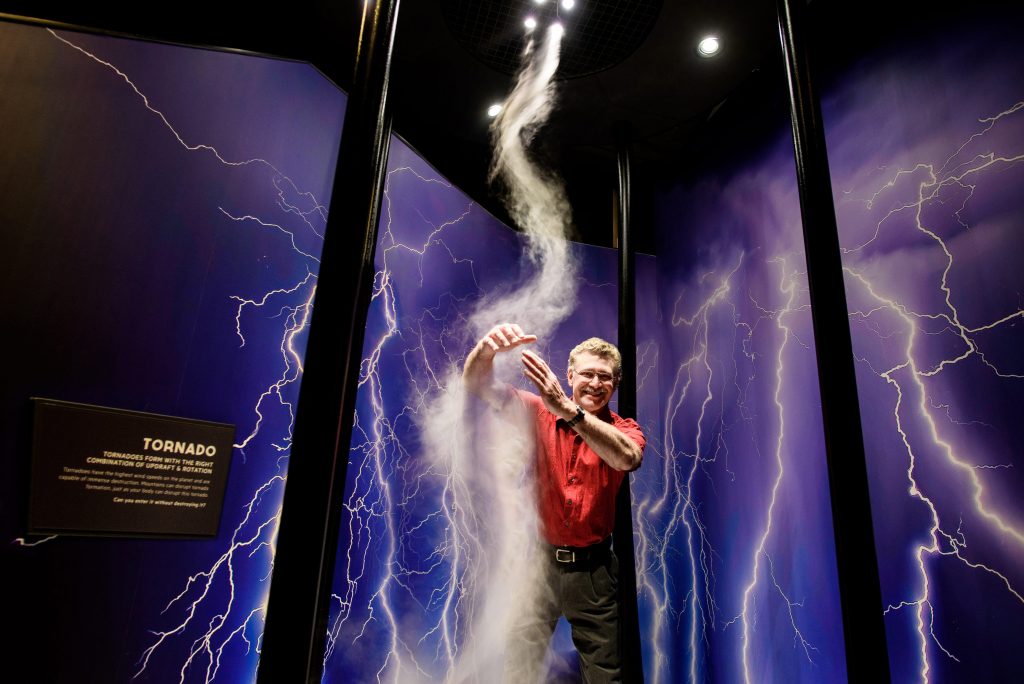 Though the words fall short of capturing the blood, sweat and tears involved in the actual process, resourceful creativity is a good place to begin in describing how Clark Planetarium Education and Exhibits Manager Durand “Duke” Johnson headed up execution of the Clark Planetarium’s bevy of new exhibits, unveiled last October. There’s the weeklong journey to Trinidad, Colorado, that Johnson and Thanksgiving Point’s Cliff Miles embarked on to bring back what’s now the largest on-display specimen of the 4-million-year-old Cretaceous-Paleogene (K-Pg) boundary (a thin band of rock dating to the extinction of the dinosaurs) in the world. Or there’s the hours of trial and error that went into creating the tornado exhibit, flanked by storm photos Johnson took himself. “All the staff went WAY above and beyond the call of duty to enable us to pull off the [museum’s] refresh project,” Johnson said.

Johnson, grew up as a “North Dakota farm kid,” taught high school math and was a planetarium director in North Carolina prior to relocating to Salt Lake City 14 years ago to manage exhibits at the Clark Planetarium. What fuels his enthusiasm to, say, hit the road for a week to dig up a piece of rock? “I get to pick one of three or four hats to put on every day,” he said. “And it’s all related to science and engineering, which, at the end of the day, is what we want to encourage others to do through these exhibits.”

In addition to the K-Pg rock and the tornado simulator, some of the new exhibits on display now as part of the planetarium’s $3.5 million refresh include a digital lunar lander simulator and the Defend the Earth video game where users protect our planet from an asteroid field—both of which were designed, built and perfected by planetarium staff members Jesse Warner, Chris Roberts, Cody Lavery and David Meinzer.

In fact, according to Johnson, the Clark Planetarium is among very few institutions of its kind to create and develop its own interactive digital exhibits, an expertise that Johnson hopes to offer to other museums to support the planetarium over the long term. “Last fall’s relaunch was more of a beginning of what’s to come rather than an end of something,” he said. “Anywhere you see an open space in the gallery is where something new will go. We plan to bring more effort to bear on this experience by offering more hands-on programming, partnerships with other local institutions, and more outreach.”