Traveling While Black in America, Then and Now

A high-tech and sobering reality check playing now at the Broadway.

The next time you’re out and about in THE BLOCKS, whether for dinner, drinks, shopping at City Creek or the Gateway or simply on your lunch break, consider stopping into the Broadway Centre Cinemas (111 E. Broadway) to check out Roger Ross Williams’s virtual reality documentary, Traveling While Black. This short-but-powerful, 19-minute experience offers a glimpse at a piece of American history that you may think you’re familiar with, but—particularly if you are not a person of color—you are likely not. 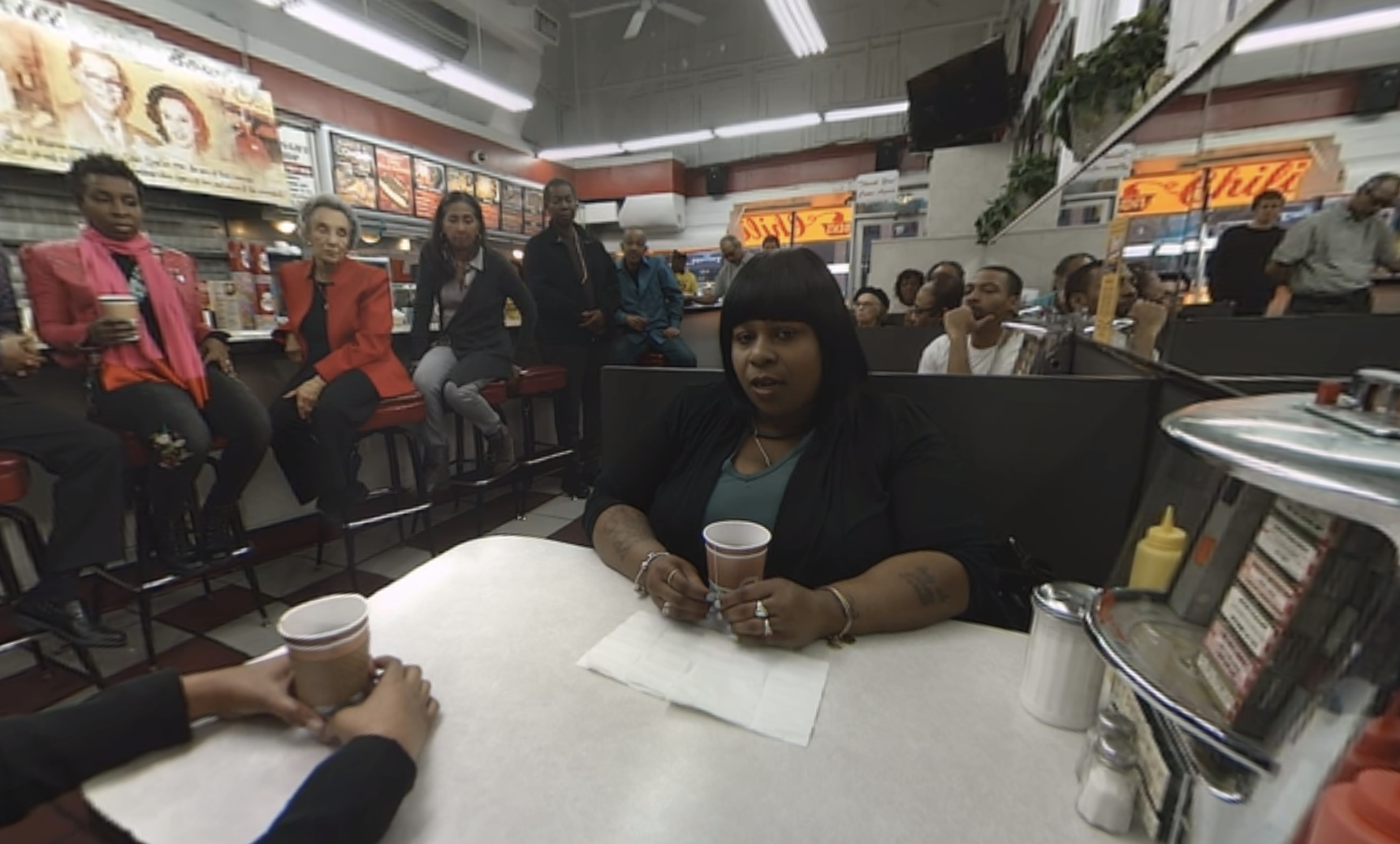 The documentary opens in a movie theater-like setting. As images of the Civil Rights Movement play in the darkened room’s film screen, the film’s first narrator, Historian Rev. Dr. Sandra Butler-Truesdale, sets the stage by relaying details of life—including many of her own—growing up in the Jim Crow era. As a result of the limited rights afforded to African Americans during this time, a New York City postal worker, Victor Green penned The Negro Motorist Green Book, an annually updated guide allowing safe navigation of hotels, road-side mechanics, taverns, restaurants and rest areas for black Americans as they attempted to pursue the great American dream of a road trip. “Every trip through America for a black person was potentially fatal,” Butler-Truesdale explained.

As the film continues, the movie theater surroundings fade to a streetscape outside of one of the Green Book’s centerpiece destinations, Ben’s Chili Bowl, opened in 1958 by Ben and Virginia Ali in Washington D.C.’s U Street corridor in 1958 and which still operates there today. Several other testimonials, similar to Butler-Truesdale’s follow, giving the impression that Traveling … will have a similar, look-how-far-we’ve-come message as was conveyed by Green Book, the feature-length film starring Viggo Mortensen and Mahershala Ali (no relation to Virginia and Ben) that won the Academy Award for Best Picture earlier this year.

But then when the interviews move to Samaria Rice, mother of Tamir Rice, a 12-year-old that was shot by police in Cleveland, Ohio in 2014, the film’s message becomes clear: though The Negro Motorist Green Book ceased publication in 1966, in many ways, America remains as dangerous for people of color as it was almost two generations ago. “The assumption is that at some time it stopped. But it never stopped,” says Courtland Cox, another one of the Traveling … interviewees/narrators, former Freedom Rider and longtime civil rights activist. “Young black people now don’t have a Green Book in front of them, they have it in their head. They are no longer looking at No Negroes Allowed signs, but they are looking at the same things that say ‘these are barriers here’ and then there are people that feel if you cross those barriers, they have the right to kill you.”

Williams, who was the first African American to receive an Oscar—for his short film Music by Prudence—received a grant from the Utah-based Sundance Institute to create the  Traveling While Black VR documentary, which premiered in Park City at the 2019 Sundance Film Festival. Traveling While Black is playing on-demand in the Broadway Centre Cinemas lobby, now through December 31, 2019. Admission is free.

Man of Many Mediums
Plan-B Theatre: The Perils of Existing in a Black Body and What Happens Next