If lately you’ve felt downtown Salt Lake City seems a bit brighter, a bit more colorful and simply filled with more good vibes, you’re not imagining things. Over the last few years, murals have popped up on building walls in both traffic thoroughfares and along intimate nook-and-cranny alleyways throughout THE BLOCKS, including the Ave Maria (158 E. 200 South), the Squatters mural (147 W. Broadway), the Eccles Theatre mural (160 Regent St), the SLC Pepper mural (250 S. 400 West) and Valter’s Utah Jazz mural (173 Broadway), to name just a few. While the reasons murals have gained popularity range from counteracting vandalism to creating community, regardless of the impetus, the result is clear: an eclectically rich public art explosion that everyone in Utah—and beyond—needs to experience.

One of newest murals in THE BLOCKS is located on Edison Street, a mid-block alleyway just east the Copper Common between Broadway and 200 South that’s home to Campos Coffee, Diabolical Records and Sailor Taylor Tattoo. As part of THE BLOCKS’ mission to activate underutilized urban space, a call for artists was made to design and paint a mural on the street-level wall of the parking garage on Edison Street’s south end—an enormous “canvas” made up of four 26-feet wide by nine-feet tall cement panels. More than 40 artists submitted proposals for the space, but in the end, Salt Lake City-based muralist and fine artist, Chris Peterson, was selected for the job. “Chris was chosen for his experience, lack of work within our boundaries, the quality of his design and his previous works,” said Cassandra Yerkes, Edison Street mural selection committee member. 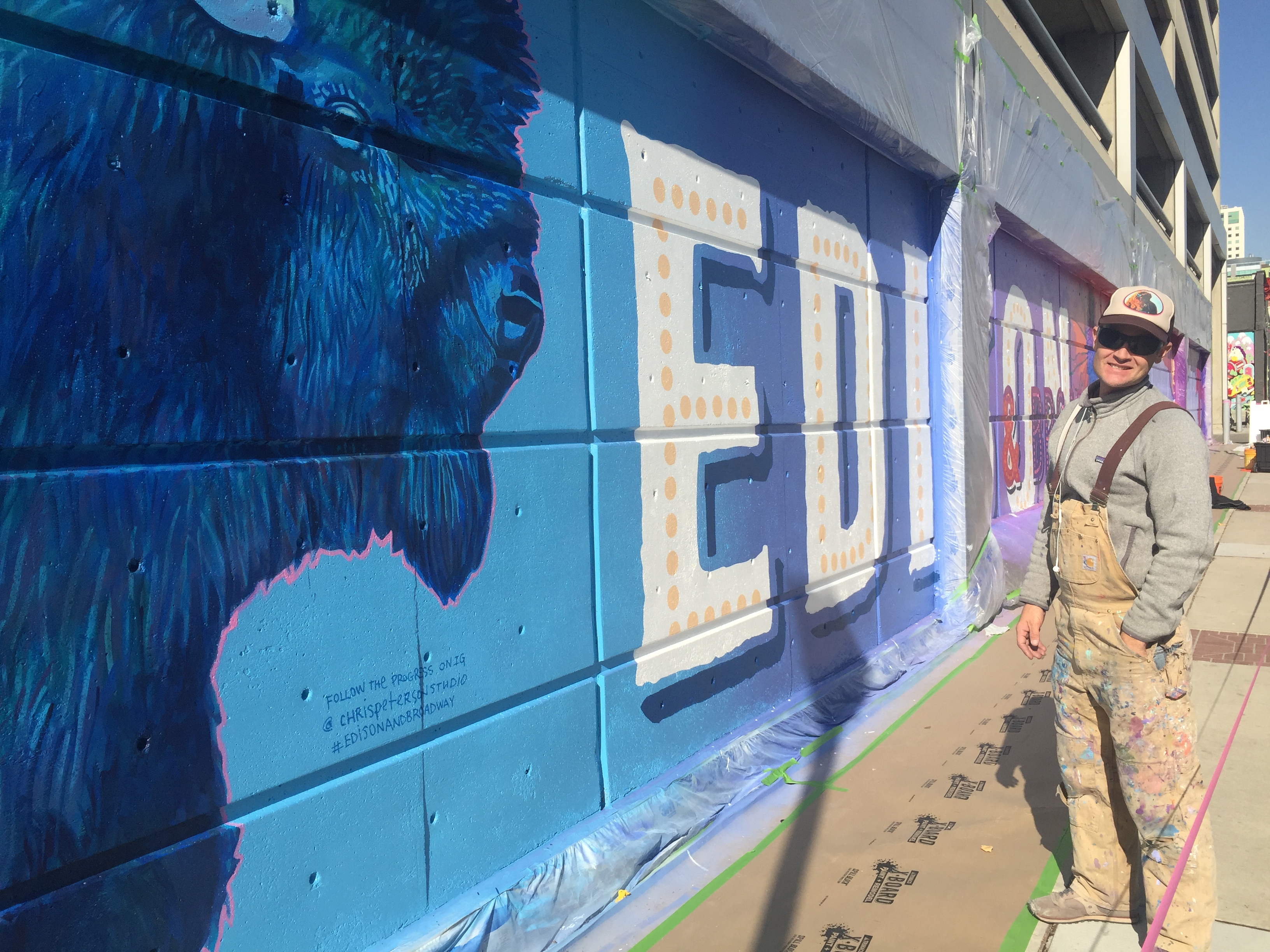 I met up with Peterson as he worked on Edison Street last week and was immediately struck with the energy and life his mural lends to the area, even in the partially completed state I witnessed it in. Peterson utilized a deeply saturated color palette—his signature style—to depict beautifully interpretive portraits of a bison, a honey bee, an elk and a grizzly bear (and maybe a trout, which he’s still deciding on). Other elements include the Salt Lake City skyline and the Wasatch Range; and a string of lights—Edison bulbs, of course—and old-timey lettering provide a through-line along the mural’s more than 100-foot length.

His inspiration, Peterson explained, was a combination of the street’s history (“A friend of mine who works at Copper Common told me Edison was the first street in the city to get electricity,” Peterson says, hence the light string), Salt Lake City’s unique location adjacent to wilderness and his own deep, almost existential appreciation for wildlife. “I designed the mural to reflect the unique character of this place, what I love about it and what I think lots of other people love about it, too,” he says. The result is a bristling-with-life homage to Utah and an unmistakable invitation to venture off Salt Lake’s wide city blocks to explore the more intimately urban Edison Street. “We are excited to add additional flair to the neighborhood and celebrate the artists and entrepreneurs that animate Salt Lake City’s cultural core,” said THE BLOCKS’ Program Director Lucas Goodrich. “These projects are made possible by the support of our artist partners, Salt Lake City, Salt Lake County and the Salt Lake City Redevelopment Agency.”

THE BLOCKS will celebrate the completion of Peterson’s mural and release of a new downtown Salt Lake City public art and mural trail smart phone app with an Edison Street block party on Friday, November 8 from 4 to 8 p.m. Events include live music at three venues, performance art, author readings and in-store revelry at Copper Common, Campos Roastery & Kitchen, Diabolical Records, Ken Sanders Rare Books, Salt Lake Film Society, FICE Gallery and Este Pizza. THE BLOCKS’ new app, developed in conjunction with Liiingo, catalogs more than 40 murals and public art pieces in downtown Salt Lake City. Art seekers can start their journey by simply scanning QR codes located on plaques adjacent to each art piece or download the app in the App Store, Google Play or Android store beginning November 8. If you’re technically-challenged, have no fear: Liiingo representatives will be at the Edison Street block party to give tutorials on the app.

For those who want to put it all together—public art; venues, museums and galleries; and coffee shops, restaurants and bars—can check out THE BLOCKS interactive map.

Or, for a bonafide urban adventure, consider just wandering THE BLOCKS and letting Salt Lake City’s art explosion unfold for you as it may.

Written by By Melissa Fields

Plan-B Theatre: The Perils of Existing in a Black Body and What Happens Next
Downtown Date Night: Three Night-on-THE-BLOCKS Itineraries for Mid-November