Thanksgiving is in the books, which means the holiday season is now in full swing. And there’s no better place to get your holiday spirit on than in THE BLOCKS. Here we offer a curated list of December events and activities to help you make this Christmas/Chanukah/Kwanza/Winter Solstice season your most memorable ever. You’re welcome. 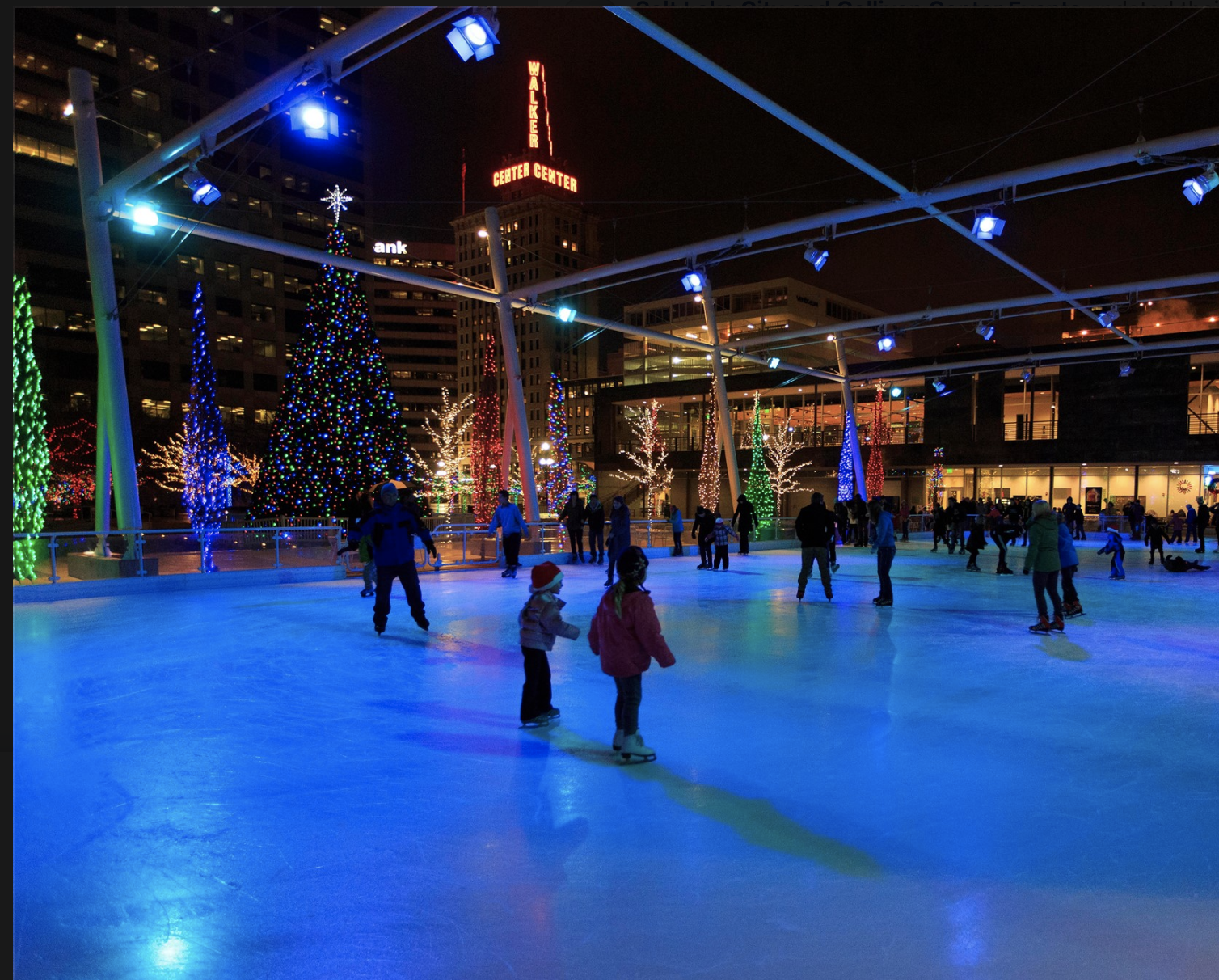 GALLIVAN CENTER ICE RINK – Practice your salchow, lutz or triple axel (or just glide around under the glittering holiday lights) at the Gallivan Center Ice Rink (239 S. Main St), open Monday through Thursday 4 to 9 p.m., Friday and Saturdays, noon to midnight, and on Sundays noon to 7 p.m. Admission (which includes skate rental) is $9 for adults; $8 for kids age 4 – 12 and seniors; and free for kids age 3 and under are free. Or hit the rink on Tuesdays, when admission is $5 for all. (Except on Christmas Eve and New Year’s Eve.)

THE LIGHTS AT TEMPLE SQUARE – Strolling Temple Square (50 N. Temple) to check out the unmatched holiday light display there is, of course, a Utah rite of passage. A trick to seeing the TS lights without the rest of Utah is to go before dawn. Afterward, reward your clan for getting up SO early with some stuffed French toast or a frittata at Eva’s Bakery. The holiday lights are on at Temple Square from 6 – 7:30 a.m. and 5 – 10:30 p.m., now through December 31.

BADFEST – Celebrate all things brewed, distilled and vinted at Badfest, a learning and social event featuring Utah’s best brewers, vintners and distillers on Saturday, December 7, at Impact Hub (150 S. State St), 5:30 – 11 p.m. Admission is $55 in advance and at the door, and includes a commemorative glass; access to workshops; beer, wine and spirits; and live entertainment. Salud!

BALLET WEST’S THE NUTCRACKER – If you’ve never seen Ballet West’s (Capitol Theatre, 50 W. 200 South) annual performance of The Nutcracker, this is your year. To celebrate this incredible piece of artwork’s 75th anniversary,  Ballet West spent $3 million on an entirely new production, which will feature William Christensen’s original choreography. Get your tickets soon. Performances run December 7 – 26 and are sure to sell out.

HOLIDAY CELEBRATIONS WITH THE UTAH SYMPHONY –  Another legacy arts organization that knows how to do the holidays is the Utah Symphony (Abravanel Hall, 123 W. South Temple) and this season is no exception. This month’s performances include: A Broadway Christmas with Ashley Brown, December 6 and 7; Here Comes Santa Claus children’s matinee performances, December 7; Celtic Women: The Best of Christmas with the Utah Symphony, December 10; A Celebration of Christmas Masterworks Concert, December 13 and 14; and on December 19, 20 and 21, Harry Potter and the Order of the Phoenix, as part of the Zions Bank Films in Concert Series.

SNOOP DOGG – Add a little “shizzle” to the season by getting your groove on at a rare Utah appearance by West Coast rap legend, Snoop Dogg. He’ll perform at The Depot (13 N. 400 West) with Warren G, RJMrLA and Trae Tha Truth on December 12.

GLOW YOGA – The Rose Wagner Performing Arts Center (138 W. 300 South) hosts a mind—and body—bending evening of movement, body paint, black lights and music with Glow Yoga to Radiohead. James Hardy with One Love Yoga leads this surreal evening of asanas sure to get your heart pumping and bring your senses alive on December 13.

DIVAS AT METRO MUSIC HALL – Don your best Christmas sweater and head to the Jolly, Holiday DIVA! show at Metro Music Hall (615 W. 100 South), December 13-15, 21 & 22 and on New Year’s Eve. This unforgettable show is performed by the Divas, Salt Lake City’s first and only professional celebrity and female impersonation show.

Bonus event: What are you doing for New Year’s Eve? THE place to be to ring in 2020 in THE BLOCKS is Last Hurrah 2019, held at The Gateway (400 W. 100 South), 8 p.m. to midnight on, of course, December 31, 2019. This gotta-be-there party includes live music on outdoor stages, indoor games, food and drink and a midnight fireworks show. For details, check back here later this month or go to lasthurrahslc.com.

Repertory Dance Theatre’s Sounds Familiar: A Modern Marriage of Unlikely Bedfellows
School's Out: Fun Stuff to Do with Your Kids in THE BLOCKS Over the Holidays