One of downtown Salt Lake City’s least lauded attributes is its architecture. There, sleek new buildings like the Salt Lake Library Main Branch, the Salt Lake City Public Safety Building and the Wallace F. Bennett Federal Building—to name just a few—complement dozens of ornate, century-old edifices including the Kearns Building, Peery Hotel and the Capitol Theatre. Many of downtown Salt Lake’s historic buildings are clustered within the easily-walkable footprint of THE BLOCKS. Instead of making your thousandth walk of the pandemic around your neighborhood, why not take your daily stroll on the road to THE BLOCKs? Following is a less-than-an-hour Salt Lake history stroll past seven buildings with a story—with a few recommends for sustenance along the way. 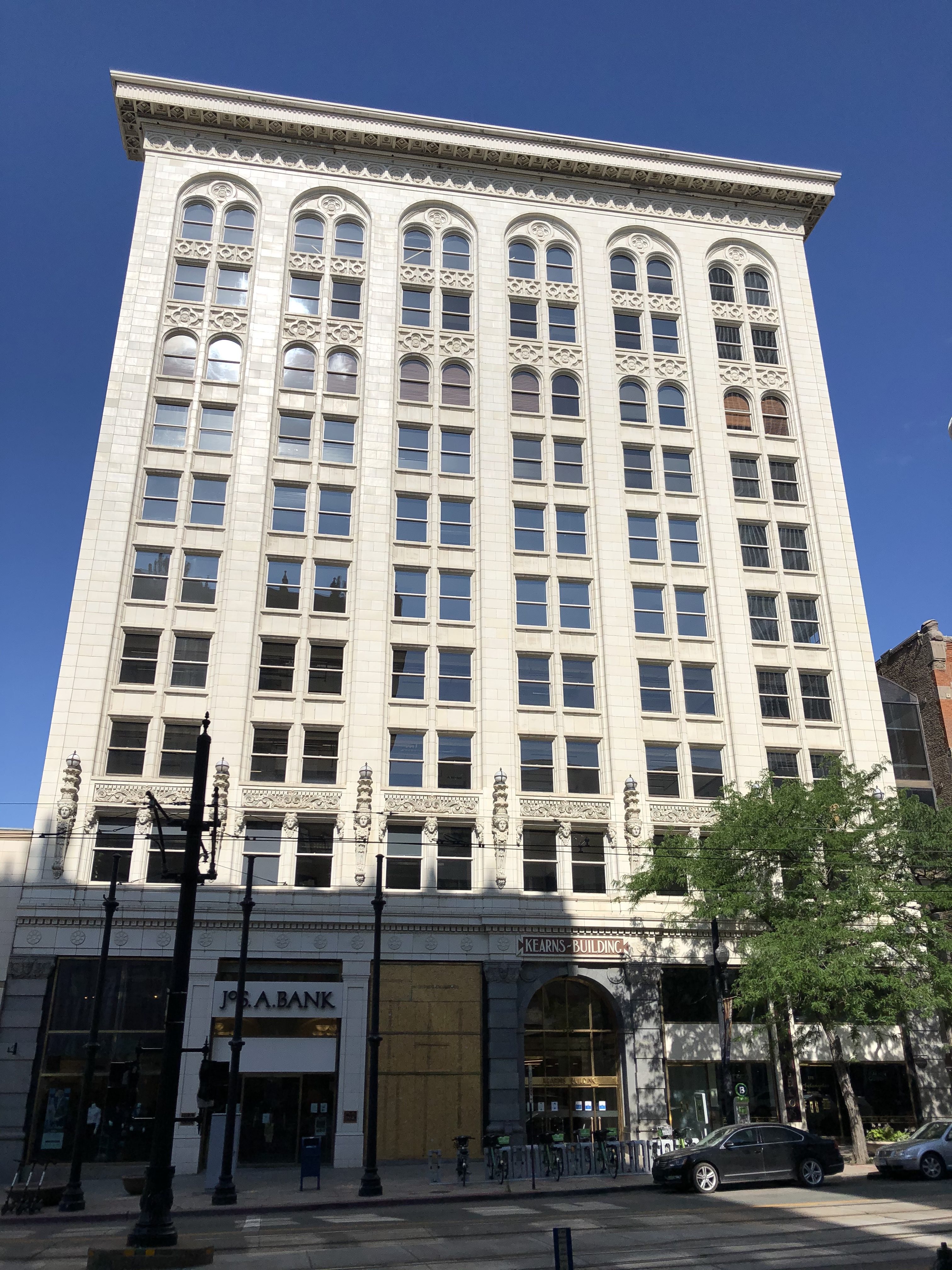 Thomas Kearns constructed his namesake building in 1911, soon after land he’d leased in Park City for mining bore a rich vein of silver. It was purchased by the Hines real estate and development firm in 1988. The company completed an initial restoration of the property in 1991 and a second, which cost $25 million, earlier this year. The Kearns Building remains the best preserved example of a Sullivanesque-style skyscraper in the Intermountain West. 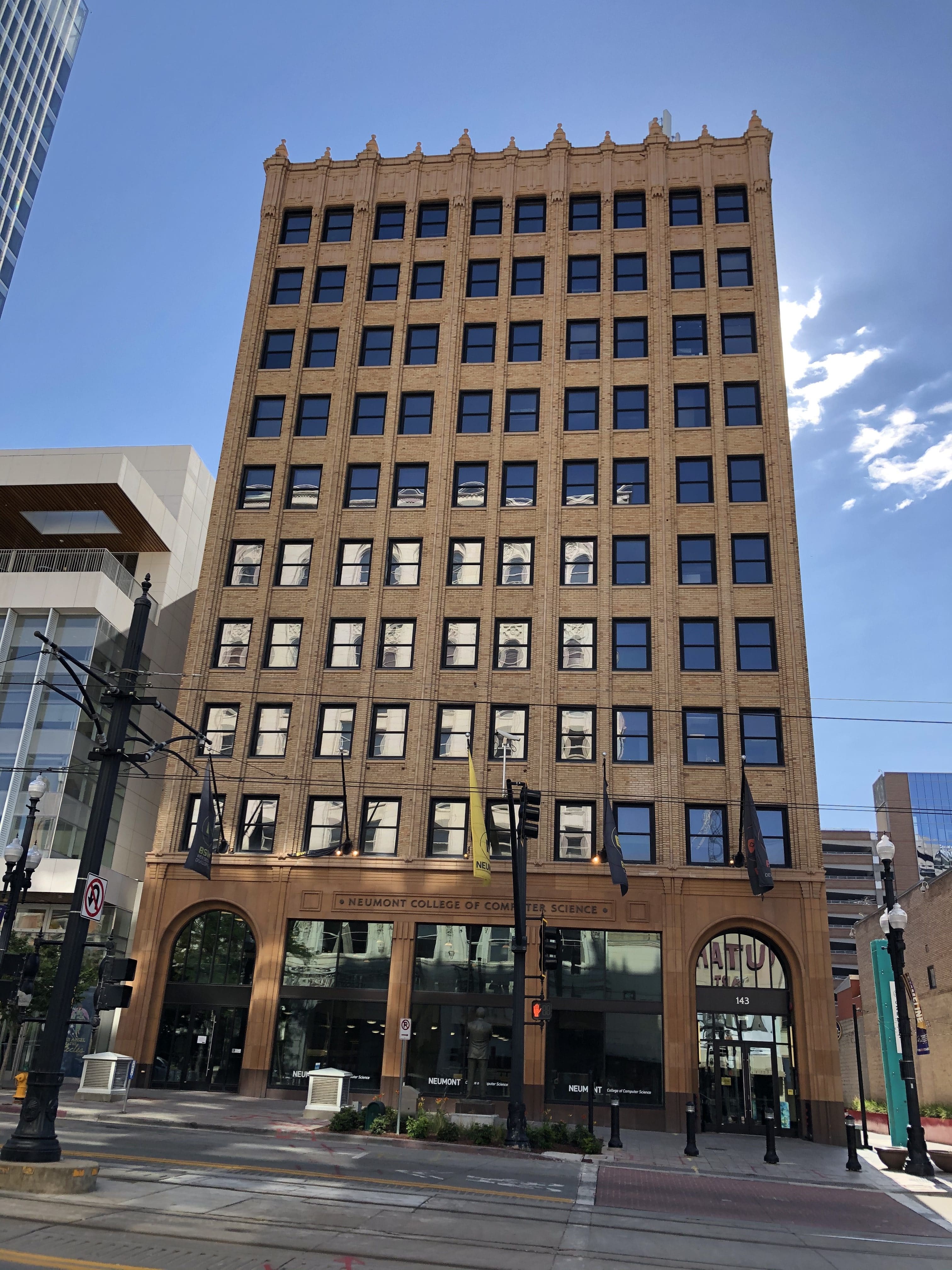 Three-time Salt Lake City mayor, Ezra Thompson, finished this building, located just across the street from the Kearns Building, in 1924 and then sold it to the Salt Lake Tribune in 1937. The newspaper staff occupied the building until the Trib’s headquarters moved to The Gateway in 2005. As a result of how The Great Depression truncated development in Salt Lake City and across the country, it is a rare downtown Salt Lake City example of the original Art Deco Style. The building is currently home to the Neumont College of Computer Science.

Pit stop: Beat the heat by popping into Three Pines Coffee (165 S. Main St) for an 18-hour cold-brewed coffee, served from the nitro tap over ice. 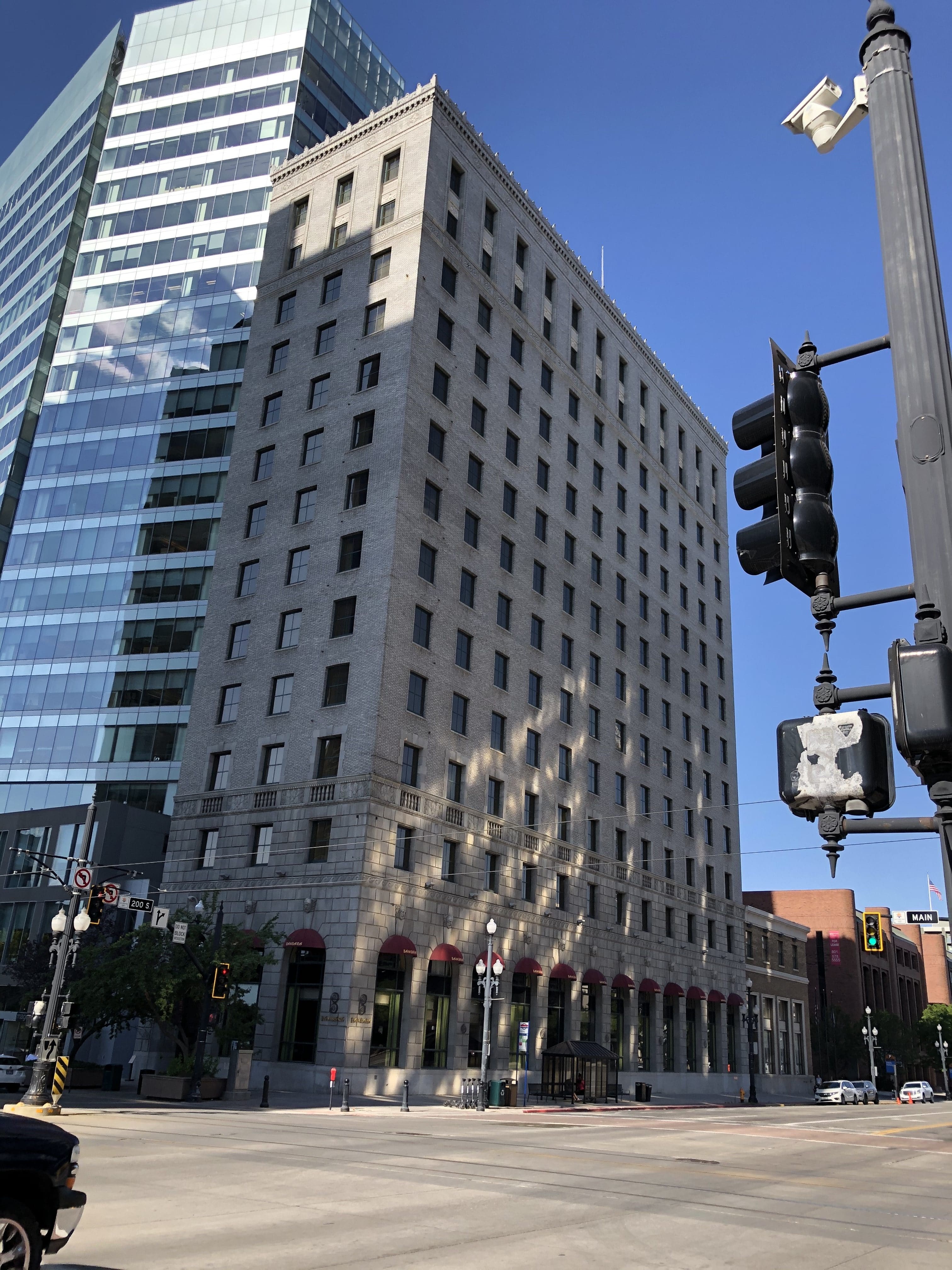 Head south along Main Street from the Kearns and Tribune buildings to 200 south. There take a right (west) and walk until you see the Hotel Monaco on the left side of the street. This building was constructed in 1923 as the Delmonico Hotel, said to be Salt Lake City’s first hotel that was not a bed and breakfast. The Hotel Monaco and its accompanying restaurant, Bambara, have been housed in this eclectic building since 1999. Some of the more thoughtful amenities guests enjoy there include a yoga mat in every room, pets are welcome and free wi-fi access to the genealogy website, ancestry.com.

Destination dining: Not many hotel restaurants have enjoyed the accolades bestowed on Bambara, located street level inside the Hotel Monaco. There, Chef Nathan Powers elevates American classics—from tomato soup to burgers—to something truly special. Bambara is currently open for in-house dining for dinner only. 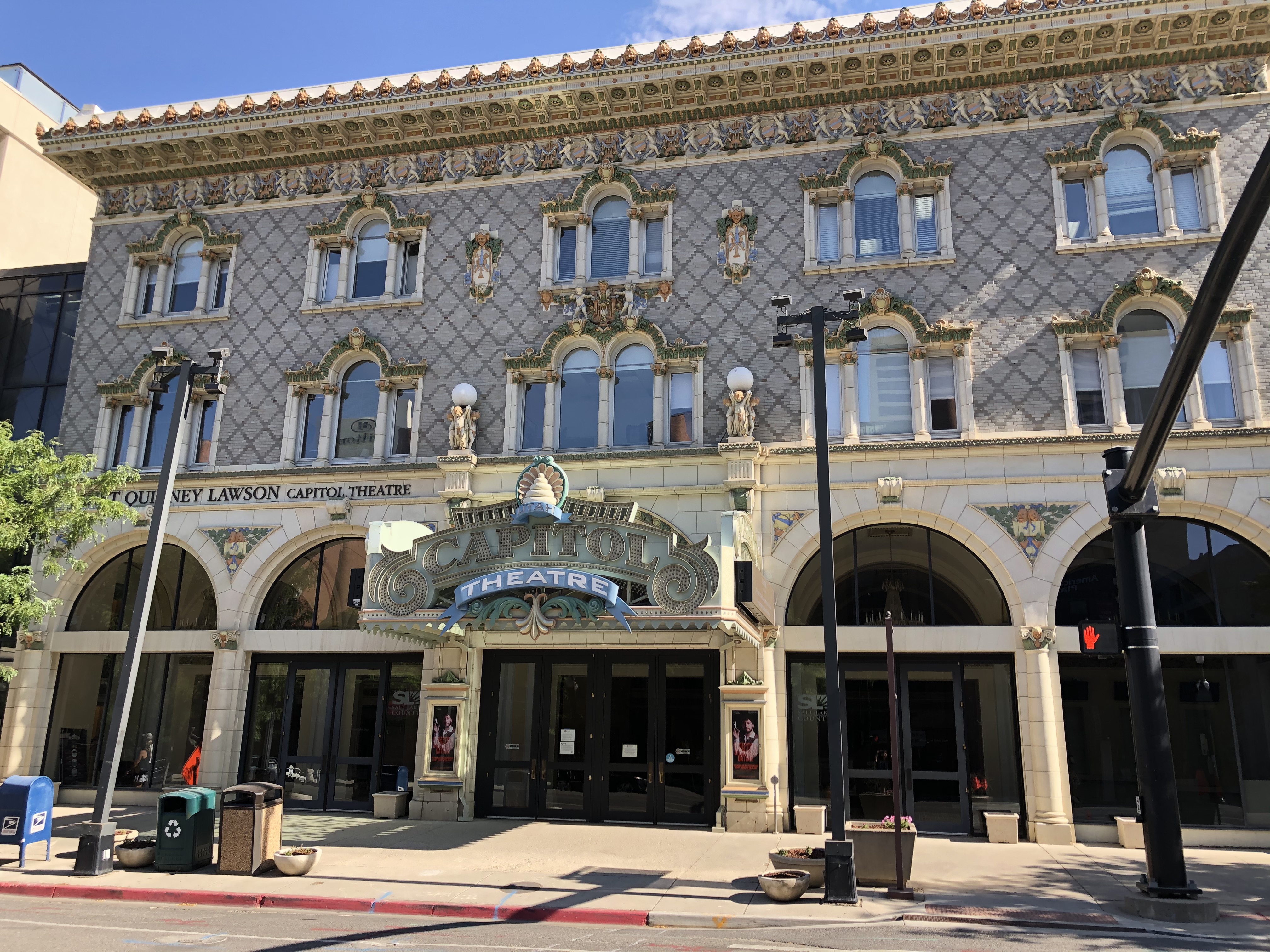 Turn right (west) onto 200 south and walk briefly until, on the right side of the street, you see the dazzling Capitol Theatre, which opened in 1913 as part of the Orpheum vaudeville theater chain. When the vaudeville trend waned in the 1930s, the theater was converted to a cinema. A fire in 1949 killed one of the theater’s ushers, Richard Duffin, and over the years mysteriously slamming doors, flickering lights and the smell of smoke have been attributed to Duffin’s ghost. The building, home to Ballet West and the Utah Opera, underwent at $33 million renovation and restoration in 2019.

Resume walking west until you reach West Temple. There, head south until you arrive at its intersection with Pierpont Avenue. Walk in on Pierpont until you come to a small complex of buildings faced by arched windows. These connecting structures were built in 1898 as the Utah headquarters for the Oregon Shortline Railroad. The building on the westernmost side of the complex served as Salt Lake City’s original high school. The street-facing building now houses the Button Down sports bar. 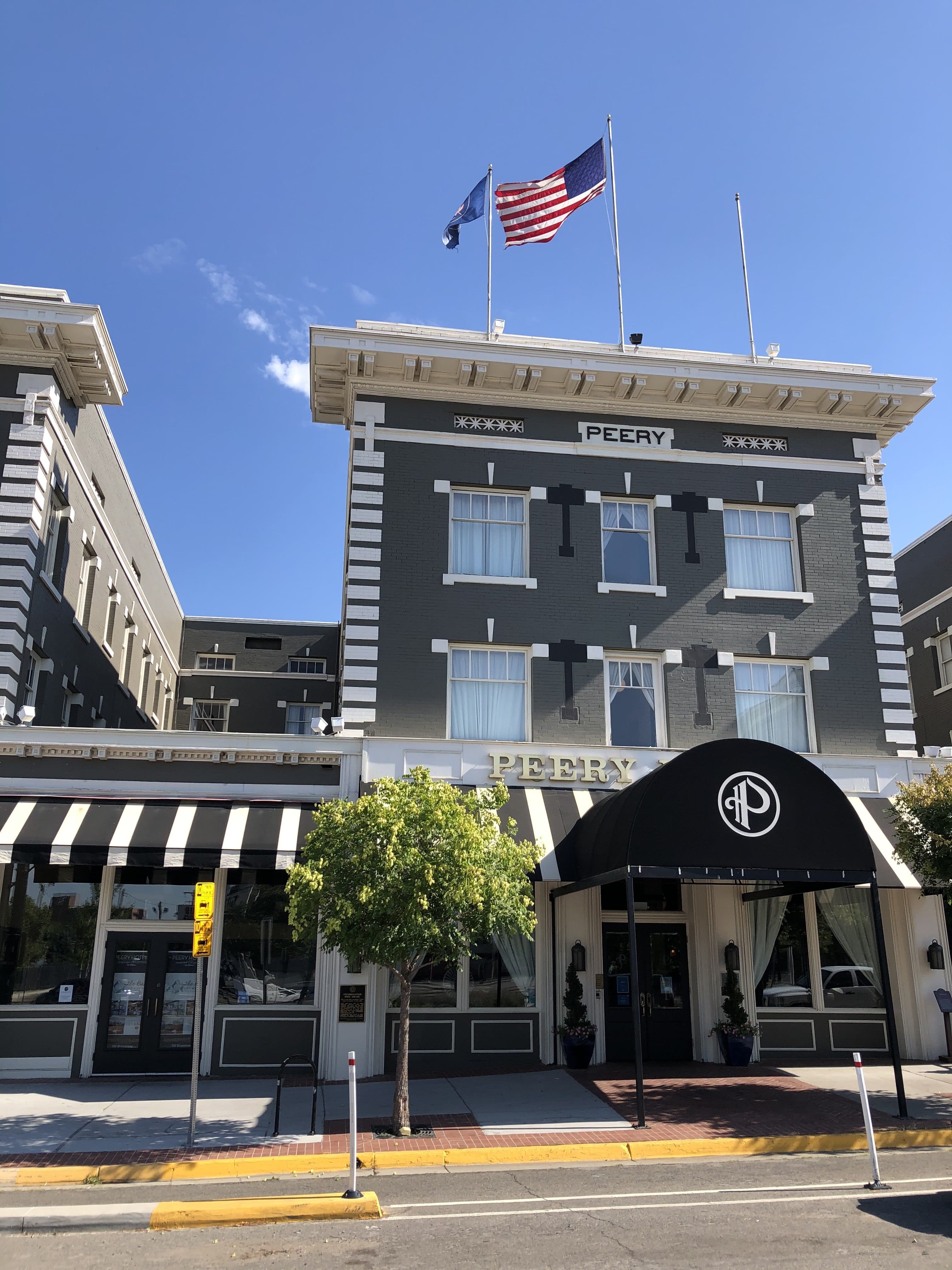 Return to West Temple and continue south until you come to the Peery Hotel. This Prairie-style building was constructed in 1910 under the same name it bears today on the site of Utah’s first synagogue (commemorated by the plaque affixed to the outside of the building). It was heralded as one of the city’s first luxury hotels and placed on the National Register of Historic Places in 1978. The hotel changed hands and names several times over the years but then returned to its original moniker in the mid-1980s. In 1999 this “grey lady” was renovated as a luxury boutique hotel and earlier this year was named by the World Property Journal as one of the “Top 5 Great Old Hotels of America.” 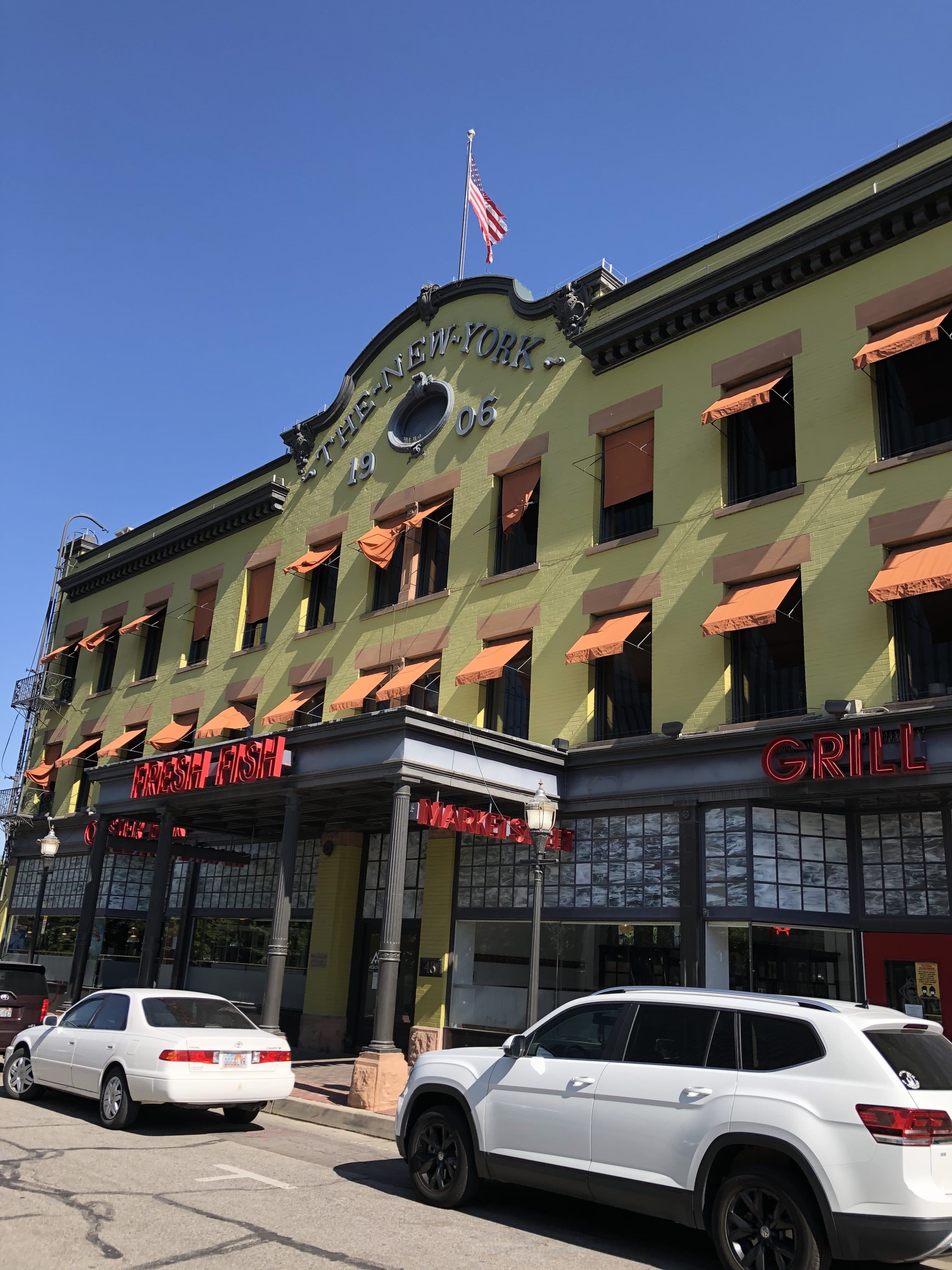 Walk farther south along West Temple until you arrive at Market Street. There take a left (east) travelling until you reach Market Street Grill. Built originally as the New York Hotel in 1906, stream heat and electric lights in each of this building’s 75 guests rooms put it on the cutting-edge of luxury hotel accommodations of the time. In the mid-1970s, pioneering restaurateurs John Williams and Tom Sieg purchased this building, renovated it and, in 1978, opened the swanky, subterranean New Yorker restaurant in what used to be the original hotel’s boiler room.  Tom Guinney was brought on as a third partner—a collaboration the trio dubbed Gastronomy. Buoyed by the success of The New Yorker, the Gastronomy partners opened two more eateries in the old New York Hotel: Market Street Grill on Halloween 1980 and the Oyster Bar on New Year’s Eve 1981. John Williams died in 2016 and the Market Street Restaurants were sold in 2019.

New market: The dining rooms at all of Market Street Grill’s locations are open. Even if you decide not to stay for brunch, lunch or dinner, be sure to take some time to grab a quart of clam chowder, a loaf of freshly baked bread, one of Market Street’s famous house-made desserts and much more from its newly renovated market.

Continue walking through Market Street to Main Street where you’ll see several bar/restaurants. Walk north along Main to return to the Kearns Building and the start of this walking tour. Note: Preservation Utah offers many more self-guided historic walking tours of Salt Lake City and environs though the free app, Utah Heritage Walks.

A Cinematic Hail Mary: An online film festival and virtual art house movie screenings to save the day
Craft Lake City Embraces the Brave New World of VR to present the 2020 DIY Festival