A Tail of Three Kitties: Paige Tashner’s Journey in Creating the Purr Pods

“I’ve always been artsy fartsy, but never considered myself an artist,” says Paige Tashner, creator of the Purr Pods, a pair of enormous metal cat sculptures currently lounging in THE BLOCKS on the northwest corner of the Gallivan Center at 201 S. Main Street. But then just a couple of years ago, Tashner made that leap from dabbler to professional artist, thanks in large part to an annual celebration of experimentation, self-reliance, self-expression and leave-no-trace principles known as Burning Man. 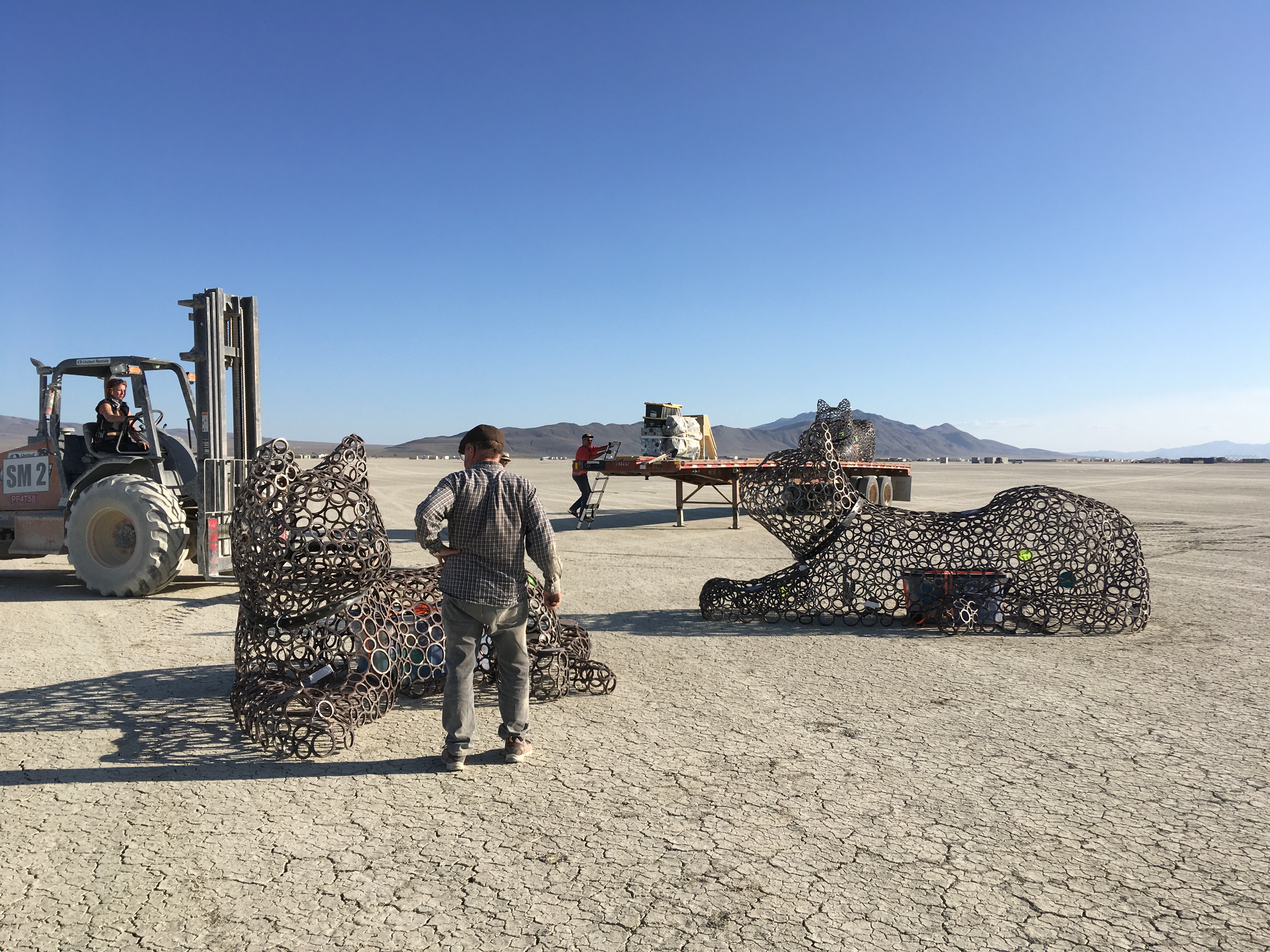 For more than 30 years, people from around the world have come together in Nevada’s Black Rock Desert for this early-September celebration culminating in the ignition of a huge male effigy, hence the event’s name. More than 80,000 people now attend Burning Man, many of whom are drawn to the event year after year to see and experience the hundreds of immersive art installations—in 2019 there were more than 400—that have become arguably Burning Man’s most defining element. 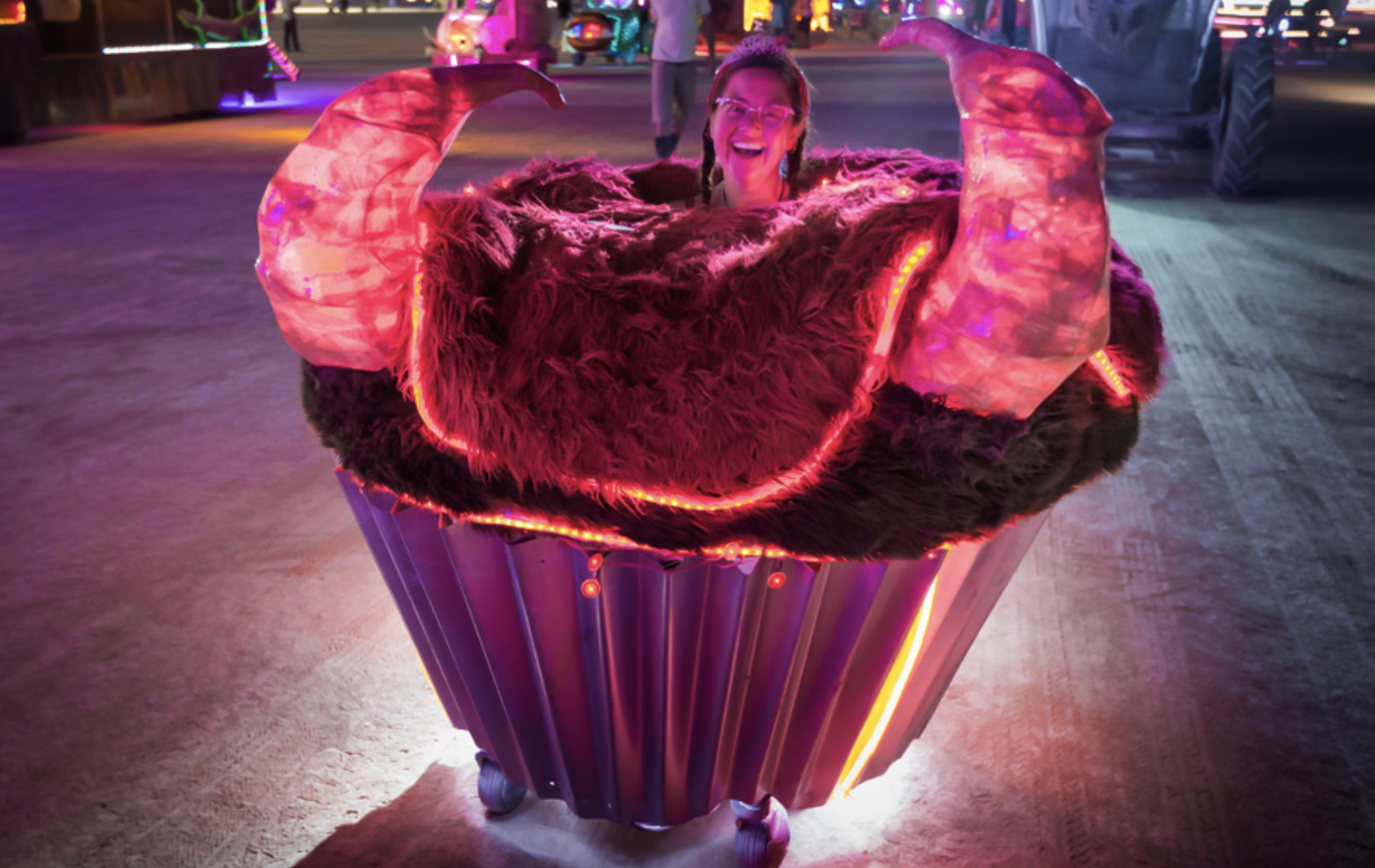 Tashner, a Portland, Oregon native who now resides in the San Francisco Bay Area, first began attending Burning Man in 2005. There she met her husband, Will Keller, whom along with Lisa Pongrace and Greg Solberg, is one of the original creators of Burning Man’s beloved cupcake and muffin cars—electric-powered cars made in the shape of, you guessed it, muffins and cupcakes. Keller showed Tashner how to make her own cupcake car (“Mine was a devil’s food cupcake with fluffy red frosting,” she says.), which became her entrée into learning how to build things. “Building my cupcake car fired me up to make something bigger,” Tashner says. 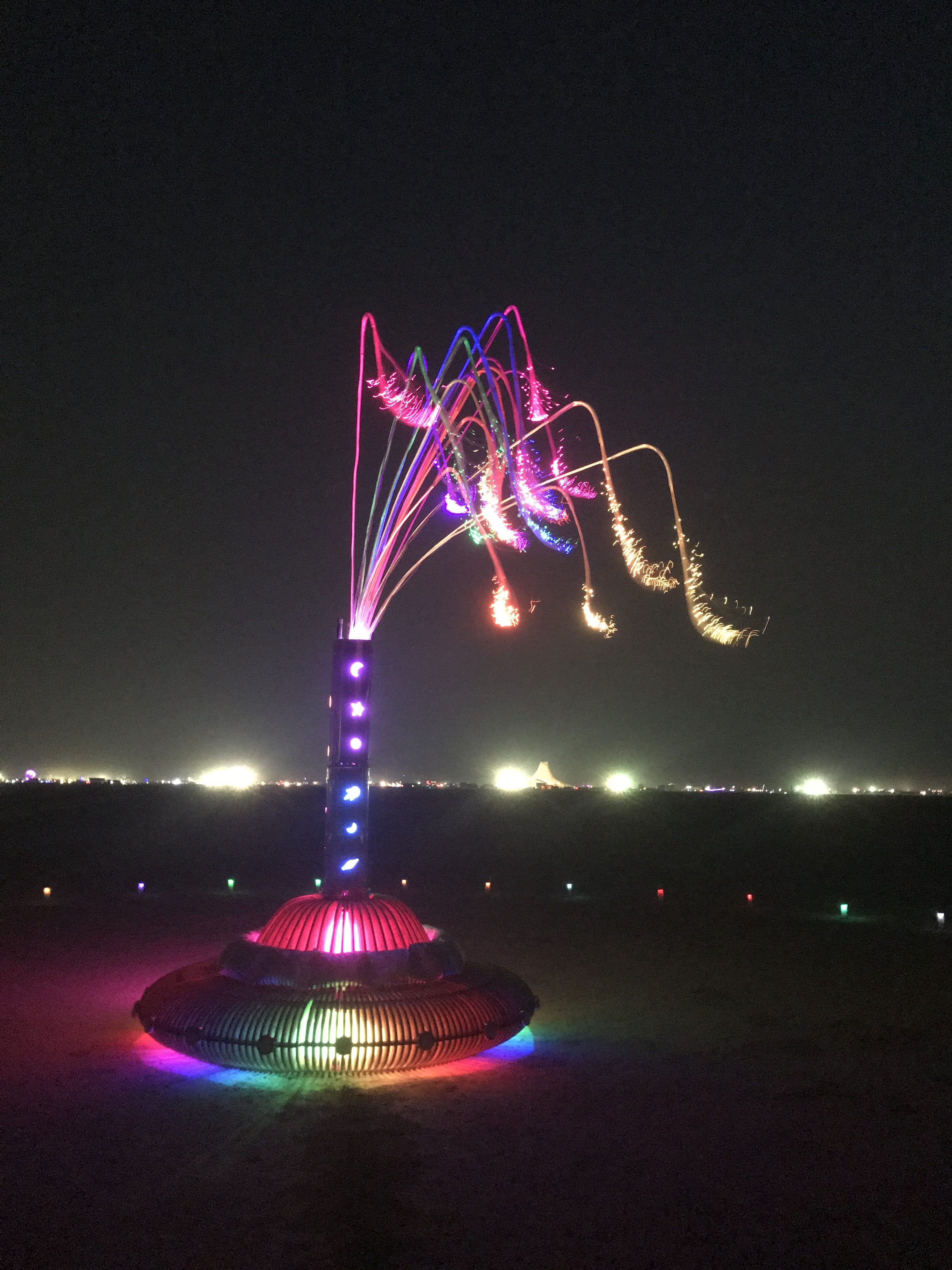 And so, combining her newly acquired construction skills with her “artsy fartsy” inclinations, Tashner concepted Stardust, a graceful nine-foot diameter bench resembling the popular idea of a flying saucer spaceship. “I’m a more introverted person by nature, and though I love all the art at Burning Man, I don’t love the parties,” she says. “So I wanted to create a piece that would offer people a quiet place away from the heart of the event that would also invite them to look up at the night sky.” Stardust is lit from within by multiple colored lights, and centered on a metallic tube, decorated with cut-outs of moons, stars and comets. A gathering of flexible rods affixed with delicate tendril lights tops the art piece. Tashner applied for and was awarded a Burning Man Arts honoraria grant to build Stardust, (Burning Man Arts is an offshoot organization that supports creation of impactful, interactive art for Burning Man and elsewhere around the world.) and was offered a display location for the bench at Burning Man 2018 far from the middle of the event, as she had requested. Since then, Stardust has appeared at the Portland Winter Lights Festival and San Mateo Maker Faire, both in 2019. 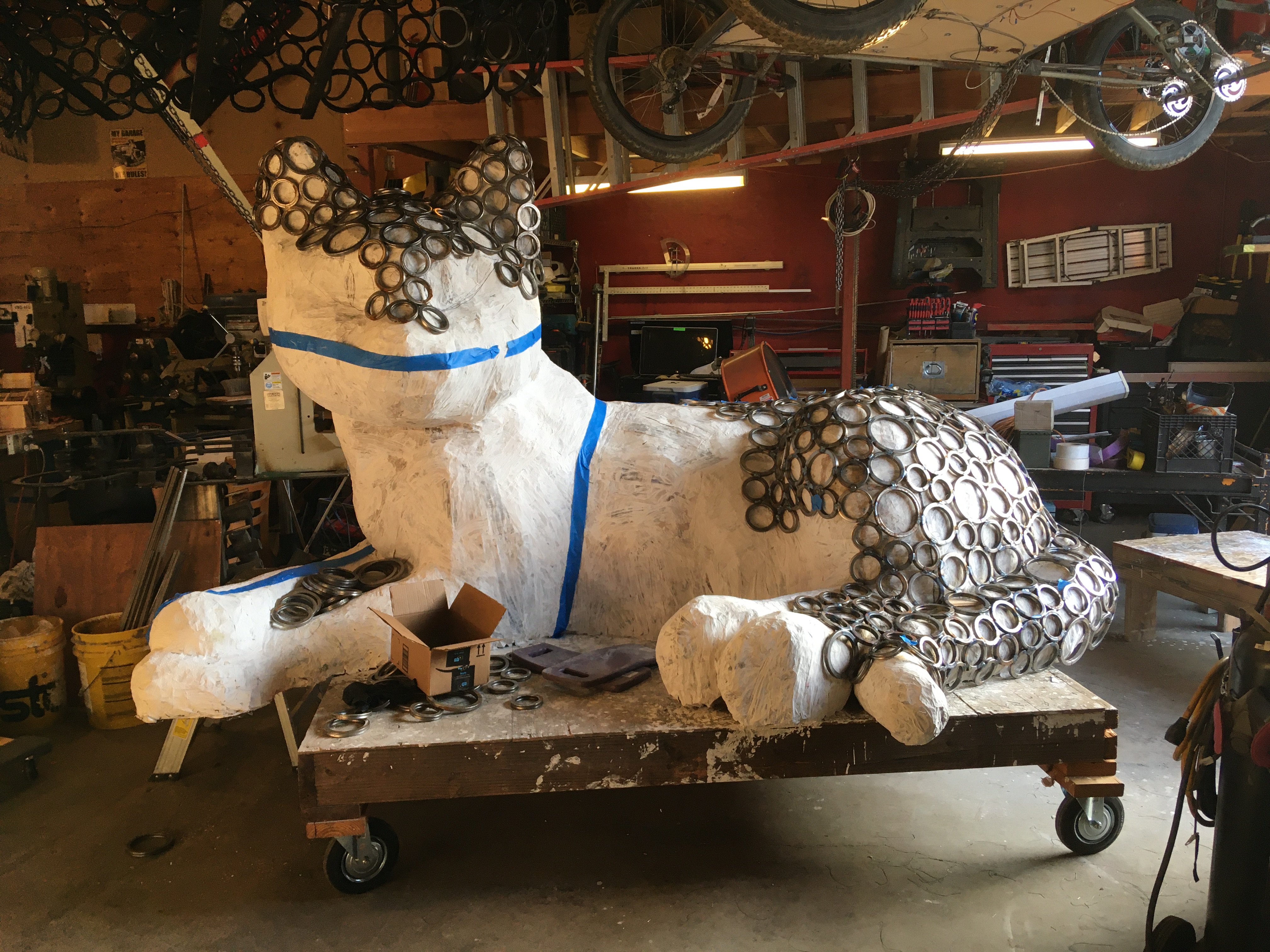 Encouraged by the positive feedback she received for Stardust, Tashner set her sights on making an installation for Burning Man 2019. “Again, I wanted to create something that would sooth introverts like me and, since I love cats, that would also educate people about cats, particularly black cats,” Tashner says. Creating the three-dimensional design for the Purr Pods three cats—named Vega, Luna and Scooby Doo after three of her beloved pets who’ve passed away—was easy, and Tashner received a second Burning Man Arts honoraria grant to help fund construction. But then she was faced with figuring out how to build a trio of 13-foot long cats], which turned out to be not so easy.

Some of the trial, error and challenges experienced and overcome by Tashner and the many friends she enlisted in making the Purr Pods included papier-mâché, slicing empty fire extinguishers and removing glue with a sandblaster. She eventually landed on a medium for her cat sculptures at the suggestion of a fellow Burning Man exhibitor. “Wes Skinner, who had a sculpture right next to Stardust at Burning Man 2018, suggested making the Purr Pods using metal rings,” Tashner says. Another friend, Ryon Gesink, told her where to find metal rings locally. Skinner, Gesink and two other friends, Ross Asselstine and Hannah Jackson helped Tashner weld the rings together. And her husband, Keller, who Tashner describes as an “electronics genius,” lit the Purr Pods as well as developed the sculptures’ sound function, a la purring.

Tashner was still finishing the Purr Pods when the 45-foot trailer arrived to take the sculptures  to Burning Man 2019. Once they arrived in Black Rock City, it took several days to install the cat sculptures on the playa (the Burning Man desert surface). “And then when we finally had all three on the playa, I just stood there and waited to see what would happen,” she says. Before long, she saw a “very large man” riding his bike very fast across the desert toward her. When he reached the Purr Pods, he threw his bike down and proceeded to hug one of the cats. “I loved that,” Tashner says. “I also loved just hanging out nearby the Purr Pods, not letting people know I was the artist, and listening to them talk about how the cats reminded them of their pets and see them figure out how to make them purr.”

Following Burning Man 2019, Tashner donated one of the Purr Pods cats to the American Museum of the House Cat in Sylva, North Carolina. Tashner partnered with We Are From Dust to install the remaining two kitties in Point San Pablo Harbor, a small boating community near where Tashner lives, where several other Burning Man pieces are displayed. The Purr Pods arrived in Salt Lake City in November 2020 where they will remain, in repose, on the Gallivan Center through May 2021. Tashner was commissioned to reproduce singular Purr Pods cats for clients in the Bay Area and in Bristol, England. She’s currently working on a smaller version of her unique feline sculptures to allow more people to realize the comfort and joy of the Purr Pods.

on the subject of P.G. ANON by Julie Jensen
A Music-infused Cure for What Ails