After one glimpse at Mollie Hosmer-Dillard’s prismatically textural series of paintings, titled Morning Hours: Experiments in Moving Images and on display now within THE BLOCKS Exhibitions on Main kiosks, how this woman from Missouri found herself in Utah begins to make sense. “Where I live in the Dammeron Valley (St. George area), I’m just 10 minutes from Snow Canyon,” she says. “Enormous ancient oceans calcified sand dunes to create these beautifully layered rock formations. It’s a really wild place that is incredibly inspiring.”

Each of the five panels on THE BLOCKS kiosk comprises 150 interchangeable rectangular prints—splashed with shapes and a palette Hosmer-Dillard says was influenced by the pinyon pine, juniper and sage brush surrounding her St. George home—that she then placed in a different arrangement on each panel. Hosmer-Dillard’s intent is, as the painting shifts through the series, to “showcase nature’s ceaseless changes.”

But much like the shape-shifting theme of Morning Hours, Hosmer-Dillard’s path to Utah’s southern quadrant was anything but linear. After growing up in rural Missouri and graduating from Ohio’s Oberlin College, she spent time in Berlin, New York City, and Indiana, exploring and honing her talent. And then in July 2020, after the pandemic thwarted her plans for more travel, Hosmer-Dillard began a two-year stint as a visiting professor of art at Dixie State University in St. George where, when she’s not teaching, she spends as much time as she can outside making both paintings and photographs. 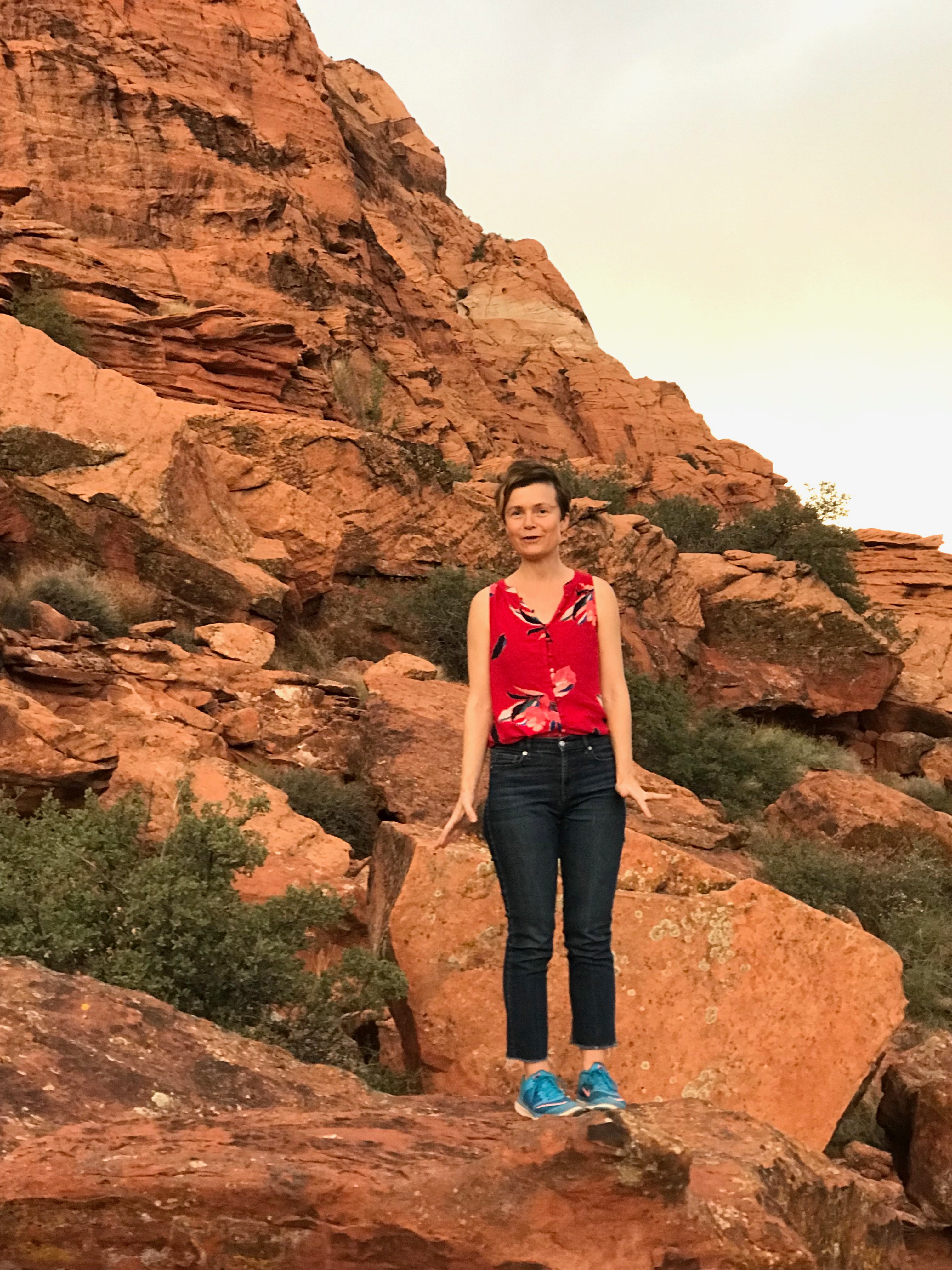 THE BLOCKS recently chatted with Hosmer-Dillard about living abroad as an artist, what drew her back to the U.S., why she loves teaching at Dixie State University and plans she has for changing the static nature of visual art.

Q: How did your evolution as an artist begin?

A: Growing up, I was always drawing, painting, and writing. But my significant growth as an artist began after I headed off to Oberlin College (a liberal arts college in Ohio), which was really the first time I was around people who viewed art as meaningful.

Q: How did you find yourself in Berlin after getting your undergrad?

A: My best friend from Oberlin was a poet and had moved there after we both graduated from college. He kept writing me letters asking me to join him. I had been working in a stained-glass shop and paying off my college loans, but then I eventually took him up on visiting. My original plan was to live in Germany for just a few months, but I ended up staying for four years.

Q: How did your time there impact you as an artist?

A: Berlin is just this amazingly free and open environment for artistic experimentation. All kinds of artists—including dancers, musicians, poets, and visual artists—flock there from all over the world. When I was there, I shared a studio space with several other painters and collaborated with all kinds of artists. I just loved how I felt like I didn’t have to answer to anybody while I was there; I never had to explain myself. But I also learned so much.

Q: It sounds magical. Why did you leave?

A: Well, it can be hard to be an ex-pat. And it got to the point where I felt I either needed to dig in and become a German citizen or leave. There were also little things about living in the U.S. that I missed, like not being on the same continent as my family, not having easy access to books written in English.

Q: Your MFA is from Indiana University. Did you return to school right away when you moved back to the U.S.?

A: Not right away. I landed for a brief period in Providence, Rhode Island and then moved to New York City where I took classes from Henry Finkelstein through the Art Students League. I learned a lot from him about the practicalities of being a painter, as opposed to the more conceptual education I’d received at Oberlin. And then getting my MFA brought those two different approaches together for me.

Q: What led you to St. George and your current position at DSU?

A: After I got my MFA, I lined up a series of residencies—and then COVID hit. So, because of St. George is nestled between the Grand Canyon and five national parks in Utah, and because I was born in Colorado and wanted to explore what it would be like to live in the West, I applied for this position at DSU. And I love teaching here. I really enjoy working with my students, many of whom haven’t had much previous exposure or experience with art, and I get to introduce them to all these big, beautiful ideas. I like creating a space where we engage in a way of thinking that’s not completely focused on getting a degree and eventually making money.

Q: You mentioned that your colorful abstract style evolved from figure painting. Are there any other genres or mediums you’re exploring now?

A: I’ve been thinking a lot about how other art forms, like dancing and writing, are distinctly imbued with movement or change, unlike paintings which are static. And I’ve also been thinking of how nothing, especially in nature, stays the same. The notion of being able to make change visible in visual art is fascinating to me.  I’d like to create more paintings made with multiple panels like the Exhibitions on Main piece. I’ve thought about exhibiting them and having the gallerist switch out a few of the panels every day of an exhibition, creating a piece or pieces that transform and end up completely different from how they started. I’m thinking about other ways to do this, too; digitally is one way, analog is another.

Q: In addition to your Exhibitions on Main pieces (On display now through November 30 at 236 S. Main Street.), where can people go to see more of your work?

A:  I’ll be taking part in a group show at A Gallery/Allen+Alan Fine Art in November.

Mollie Hosmer-Dillard’s Morning Hours: Experiments in Moving Images will be on display in the Exhibitions on Main north kiosk at 236 S. Main Street through November 30, 2021.

Street Art Goes Inside at UMOCA
Found in THE BLOCKS