“Let’s meet downtown for a drink” is the opening line in an endless number of stories about friendship, business ventures, and romantic partnerships. Tonight, downtown Salt Lake City bars are alive and buzzing with people beginning their next great story.

Following are some of our favorite downtown sippers and the bars and restaurants serving them.

Named for the moniker legendary baseball player Leroy Robert “Satchel” Paige gave to one of his pitches, Alibi Bar & Place’s (369 S. Main St.)  Long Tom is a gin cocktail that, while seeming to have not much to do with baseball, tastes like the golden days of autumn in a glass. Made with Old Tom gin, Amaro Montenegro, Laird’s Applejack brandy, orange bitters and fresh orange zest.

When the weather turns brisk, there’s no better warmer than the Hot Toddy at Bar X (155 E. 200 South). It begins with black tea brewed with baking spices and then embellished with fresh ginger, lemon and honey. The default booze addition is bourbon, of course, but why not be a little adventurous and try it with cognac, rye or even tequila?

While many may not consider sangria a cocktail per se, when visiting the plant-based Zest Kitchen & Bar (275 S. 200 West), it makes sense to try something less boozy (And super delicious!) like the Beet Sangria, made with organic red wine, organic beet juice and fresh fruit.

Though those in the know often indulge in Varley’s (63 W. 100 South) signature Tangerine Lime Sour (Kettle One grapefruit vodka, rose, lime, citrus tea). Cool temps, however, have us dreaming of this bar’s Sugar & Spice, a comforting riff on wassail made with Hennessey, red wine, citrus and spices.

SHIPWRECK at THE VAULT

When the grey days of winter arrive in Salt Lake City, as they always do, you can find us enveloped in one of the canopy armchairs at The Vault (inside Hotel Monaco, 202 S. Main St),  sipping a Shipwreck (Cruzan rum, Cyanar, St. Germain, Orgeat, lime) and dreaming of sunny skies, lapping surf and white sand beaches.

As you might guess, the beer, wine and cocktail menu at Whiskey Street (323 S. Main St) reads like a novel, with creative touches throughout. A nod to the building’s history as a 1930s-era French and Italian restaurant can be found in The Rotisserie Inn Punch, made with Bacardi Rum, raspberry liqueur, lemon, simple syrup, and prosecco.

Like its sister restaurants, the cocktail program at White Horse Spirits &  Kitchen (325 Main St) is both innovative and extensive, offering more than enough to choose from right off the menu. We, however, can’t stop thinking about a drink the mixologists at White Horse concocted earlier this year to celebrate St. Patrick’s Day: the Booley House—a gingery, caramelly wonder made with Red Breast 12-year Irish Whiskey, ginger liqueur, sherry, Laird’s Applejack and black lemon bitters.

Though Bodega (331 S. Main St) is best known as the portal to the subterranean restaurant, The Rest, this small but mighty bar has a following all its own, built largely on tequila. You can get right to it with a $3 shot or, for something to savor, order up a First Rodeo, made with tequila, lemongrass simple syrup, Honest John Bitters Co’s lemongrass cardamom bitters, jalapeño and Topo Chico.

Diversity is the name of the game at Copper Common (111 E. Broadway), where you can imbibe everything from an expertly crafted high ball to a White Claw. But where this popular bar excels, in particular, is with its Patio Spritzers. Choose from one of five on the menu or ask the bartender to create something completely unique. Then grab a seat outside and watch the world go by on Broadway. 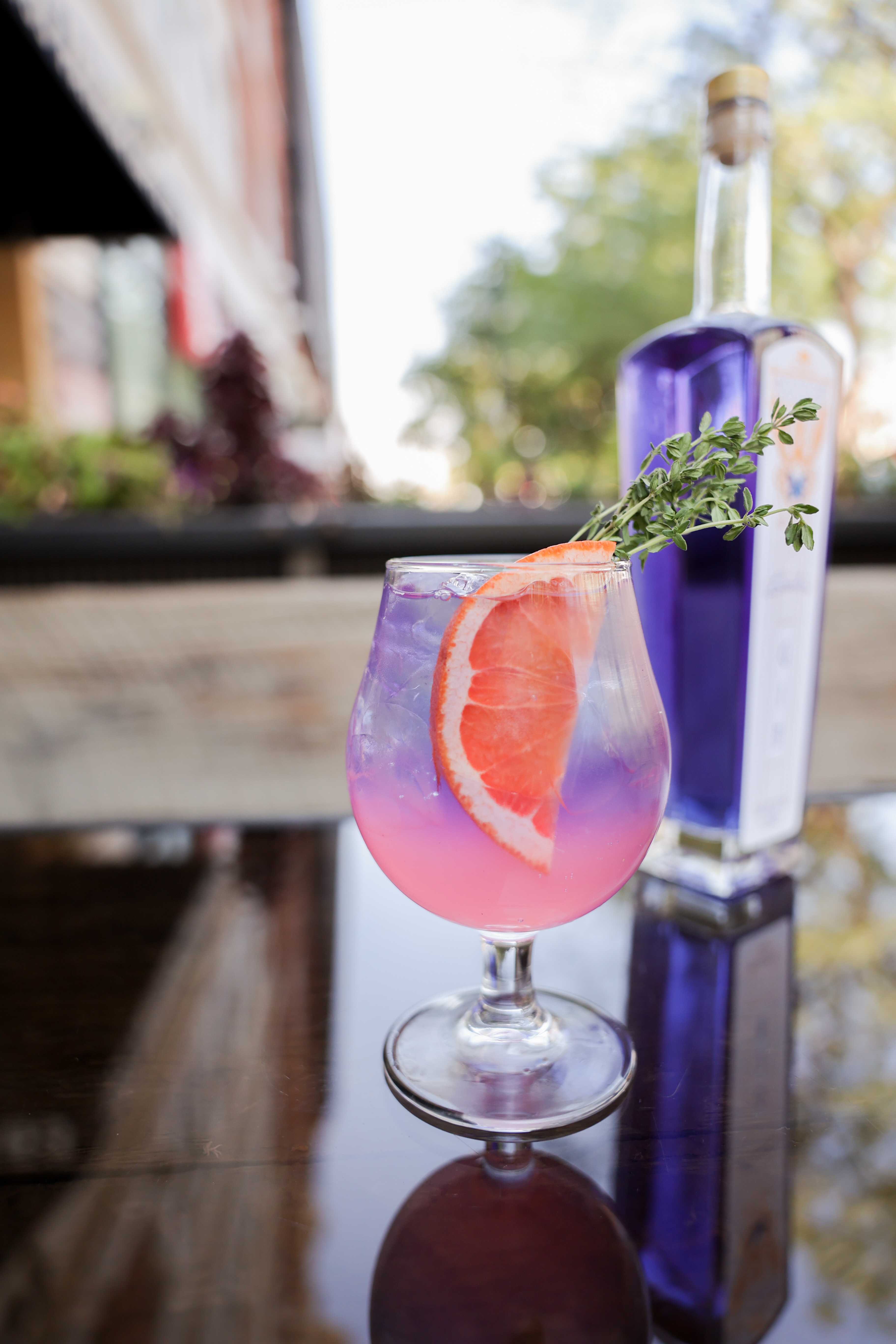 London Belle Supper Club (321 S. Main St.) is well known for its menu of reimagined classic pub food (Salt Lake Magazine named it a “best restaurant” in 2019.). But its moody and plush decor makes it an appealing destination for just drinks as well. We recommend choosing from the cocktail menu’s seven iterations of the classic Moscow Mule—one we’re particularly enamored with is the Stoli Cucumber Mule.

Against the backdrop of Gallivan Plaza and the creativity of local DJs, Good Grammar (69 E. Gallivan Ave) is the place for the fruity, earthy and unexpectedly fantastic mashup known as the Pine Soul—tequila, Zirbenz pine liqueur, Chartreuse yellow liqueur, lemon and pineapple.

Sip one of Gracie’s (326 S. W. Temple) longstanding faves, the Blackberry Basil (Ogden’s Own Five Wives vodka; fresh blackberries, basil and lemon juice; ginger ale), while you drink in sweeping views of downtown and the mountains beyond from one of downtown’s most fabulous rooftop decks.

HANZO STEEL at UNDER CURRENT BAR

This airy and beautifully renovated former auto dealership has been a go-to for well-crafted cocktails since it opened in 2015. Not surprisingly, the menu at Under Current Bar (270 S. 300 East) offers plenty to choose from, including Hanzo Steel. This elevated riff on an Old Fashioned is made with Japanese whiskey, rye Falernum, Swedish Punsch and coconut bitters, garnished with a ground coffee bean. 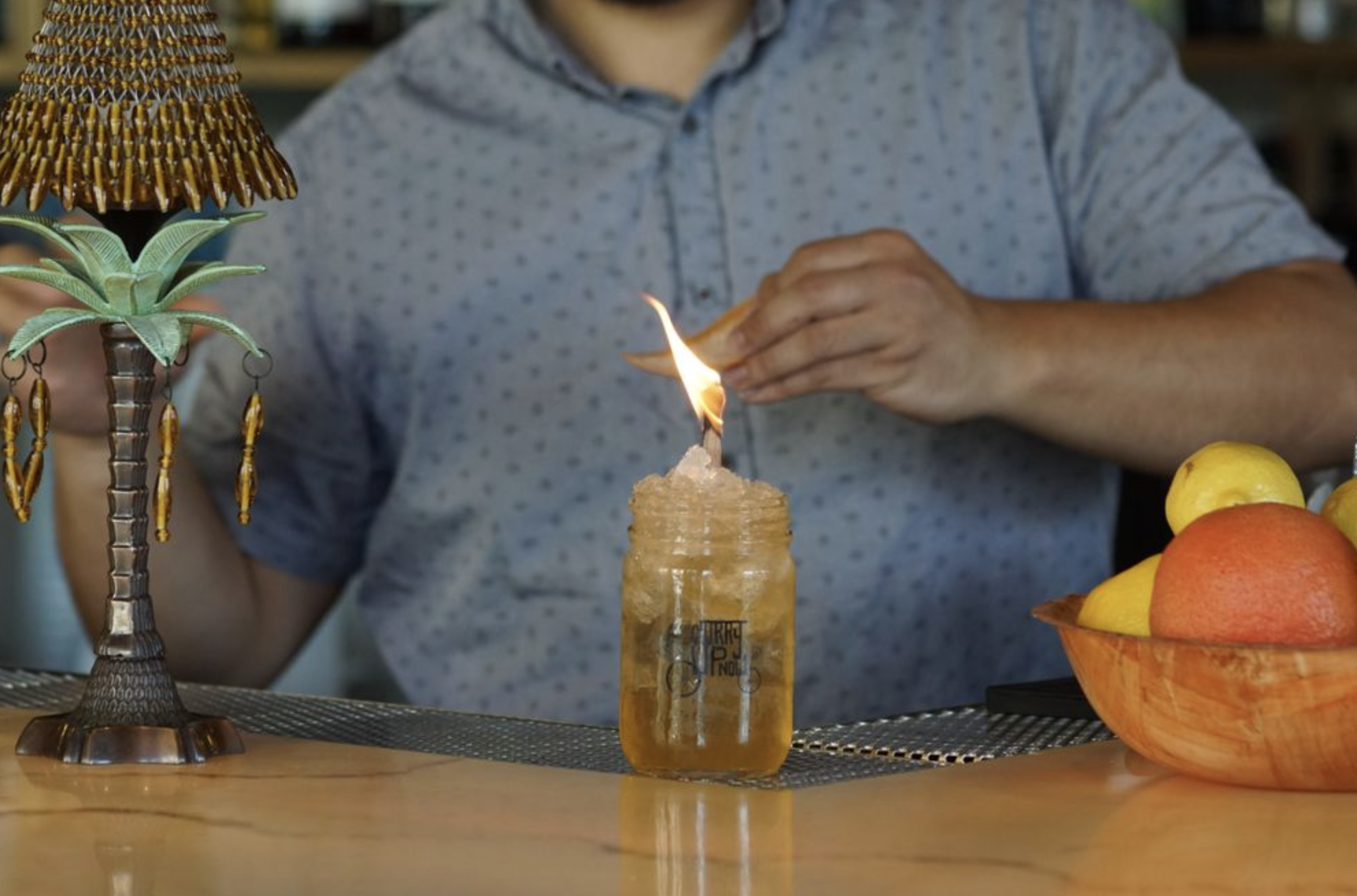 The hip and cozy Mortar & Pestle (152 E. 200 South), located within the intimate Edison Street alleyway, is well worth seeking out. M&P’s list of signature cocktails is creative and long, all of which are made with house-made syrups and locally sourced booze and bitters. One that scratches both the performance and gustatorial sweet spots is Inflight Smoker, an unexpected riff on a margarita or paloma made with mezcal, grapefruit-lime elixir, bitter orange liqueur, and Jamaican #2 Bitters.

Many may assume that a mimosa or Bloody Mary are among the most popular cocktails at the 41-year-old Market Street Grill  &  Oyster Bar (54 W. Market St), where brunch is an institution. Sure, those breakfast sippers are certainly high on the list, but it’s the Bling Bling, made with Tito’s vodka, fresh raspberries, simple syrup and a float of prosecco, that takes the cake.

LAVENDAR MARTINI at THE RED DOOR

Before or after a Jazz Game, head over to the intimately friendly Seabird (7 S. Rio Grande St, The Gateway) for the Verde, a well-balanced amalgamation of earthiness and floral notes that makes whiskey sing. Made with rye whiskey, green Chartreuse, lime smoked rosemary and lavender simple syrup.

Have a yearning to up your at-home cocktail game? Take an in-person cocktail class at Caputo’s (314 W. Broadway), stockists of an ample selection of bitters, mixers, garnishes, syrups, extracts, and more. Or go online for an evening of cocktail education and fun with the Salt Lake City-based Bitters Lab, offering three-session cocktail-making classes on a quarterly basis.