Shinedown at The Complex 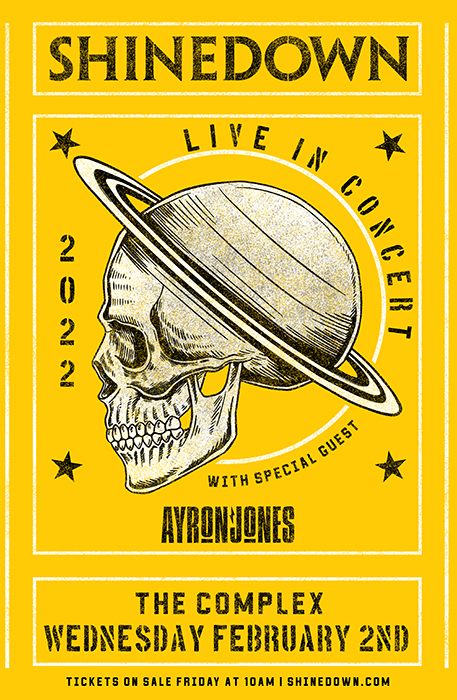 Shinedown at The Complex

COVID-19 Event Specific Guidelines:
The Event Organizer is requiring all attendees of this event to have received a negative COVID-19 test within 72-hours prior to entering the venue, OR be fully vaccinated against COVID-19. In attending the event, you certify and attest that you and all individuals in your party attending the event will abide by the following regulations:

All fans will provide printed proof of a negative COVID-19 test within 72-hours prior to entering the venue, OR be fully vaccinated against COVID-19 (at least two weeks after final dose) and provide printed documentation providing proof of immunization.

Unvaccinated fans under 12 years of age will be required to take a COVID-19 diagnostic test within 72-hours before the event and will provide proof of negative result prior to entering the venue.

Entry requirements and venue protocols are subject to change.

*This is the only online ticket site, any other links selling tickets are not affiliated with The Complex and should be avoided.*

Multi-platinum, record-breaking band Shinedown – Brent Smith [vocals], Zach Myers [guitar], Eric Bass [bass, production], and Barry Kerch [drums] – has sold more than 10 million albums and 10 million singles worldwide, earned 14 platinum and gold singles, 5 platinum and gold albums, 16 #1 Active Rock hits, and amassed more than 4.5 billion total streams. Each of Shinedown’s 27 charting singles on Billboard’s Mainstream Rock Songs Chart has reached the Top 5 – an unparalleled achievement – and they hold the record for most Top 5s ever on this chart. Their hit songs “Atlas Falls,” “ATTENTION ATTENTION,” “GET UP,” “MONSTERS” and “DEVIL” bring their total to 17 #1s on the Mediabase Active Rock Chart and 16 #1s on Billboard’s Mainstream Rock Songs Chart, breaking the record for the most #1s ever in the history of the Billboard chart. Shinedown was also recently named #1 on Billboard’s Greatest of All Time Mainstream Rock Artists Chart.

Shinedown’s film ATTENTION ATTENTION, directed by Bill Yukich (Beyonc?, Metallica, Wiz Khalifa), is a cinematic experience of their 2018 studio album of the same name and is out now via Gravitas Ventures. The film features theatrical performances from the band, Melora Walters (Magnolia, Big Love, PEN15), and Francesca Eastwood (Old, Twin Peaks, Fargo), and is available on digital and cable VOD in the U.S. and Canada on iTunes, Amazon, Google Play, Vudu, Comcast, Dish Network, Verizon Fios, and Mediacom, among others – PRESS HERE to purchase, PRESS HERE to watch the trailer. ATTENTION ATTENTION is a visual journey that brings to life the story of the band’s acclaimed chart-topping sixth full-length and latest album which ushered in their biggest and boldest chapter to date. Shinedown’s distinct mix of explosive rock ‘n’ roll spirit, thought-provoking lyrics, and melodic sensibility on ATTENTION ATTENTION (Atlantic Records) has accumulated more than 622 million global streams, debuted Top 5 on the Billboard 200, simultaneously hit #1 on Billboard’s Alternative, Top Rock and Hard Rock Albums Charts, led to five iHeart Radio Music Award nominations for Rock Artist of the Year (2019, 2020, 2021) and Rock Song of the Year (2019, 2020), and major media acclaim. From life’s lowest lows to the highest highs, what emerges from the film is a powerful and enduring statement about humanity, overcoming struggle, the importance of mental health, not being afraid to fail, and the resolve of the human spirit.

Hailed for their high-octane live shows, Shinedown continues to engender diehard love from millions of global fans and has racked up countless sold-out tours and festival headlining sets as well as numerous national television appearances. The band is playing to sold-out arenas in the U.S., backed by their biggest, most eye-popping production yet and propelled by the undeniable power of front man Brent Smith’s voice.