Yungblud at The Complex 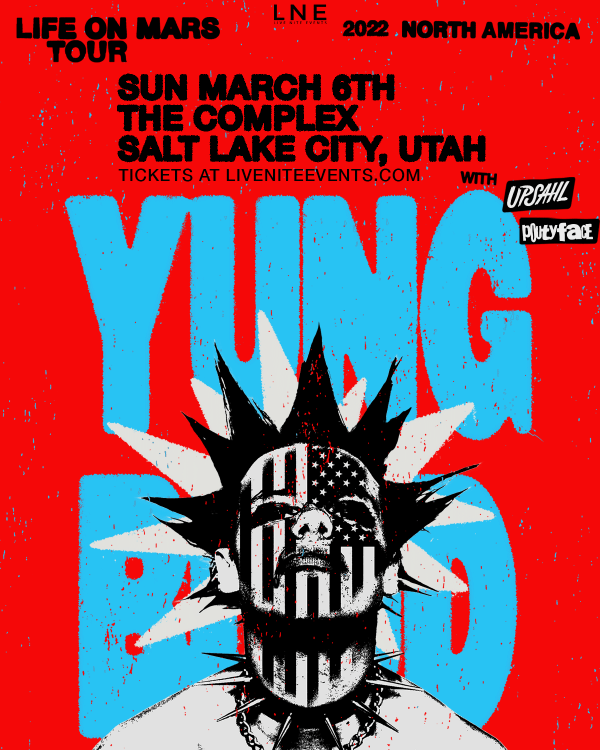 Yungblud at The Complex

YUNGBLUD
The Life On Mars Tour

*THIS IS THE ONLY OFFICIAL TICKET LINK. ANY OTHER LINK SELLING TICKETS IS A SCALPER. DO NOT BUY TICKETS FROM SCALPERS AS THEY CARRY A HIGH LEVEL OF FRAUD*

Born in Yorkshire, England, YUNGBLUD (aka Dominic Harrison) is a multi-instrumentalist who first picked up a guitar at age two and began writing his own songs at age 10. The 23-year-old artist is known for voicing what he feels are major concerns for his generation, using his music to unite and empower the youth of today. Following the release of his self-titled EP and his full-length 2018 debut, 21st Century Liability, YUNGBLUD released the underrated youth EP in 2019, which debuted in the top 10 on the UK Official Albums chart. YUNGBLUD was crowned MTV Push: Ones to Watch winner at the beginning of 2020, when he was also shortlisted for the BBC Sound of 2020 poll. YUNGBLUD went on to win ‘Best Music Video’ at the NME Awards in Feb 2020 and Best Push artist at the 2020 MTV EMAs. Over the years, YUNGBLUD has performed to sold-out crowds in over 20 countries and played some of the world’s biggest festivals, including Austin City Limits, Life Is Beautiful, Lollapalooza, Reading and Leeds Festivals, and Vans Warped Tour. YUNGBLUD released full-length album ‘weird!’ on December 4th 2020, which debuted at no.1 on the UK Official Album Chart after racking up a massive 39,000 chart sales in the first week. Described as a coming-of-age album, ‘weird!’ features tracks “god save me, but don’t drown me out”, “weird!”, “strawberry lipstick” and “cotton candy”. In Autumn 2020, he launched The YUNGBLUD Podcast on BBC Sounds, where he meets young music fans who are approaching turning points in their lives, to discuss topics and issues affecting young people today whether it be gender, sexuality, identity, money worries, friendships, style or mental health. YUNGBLUD now has over 10million monthly listeners on Spotify and over 1.4billion global streams.