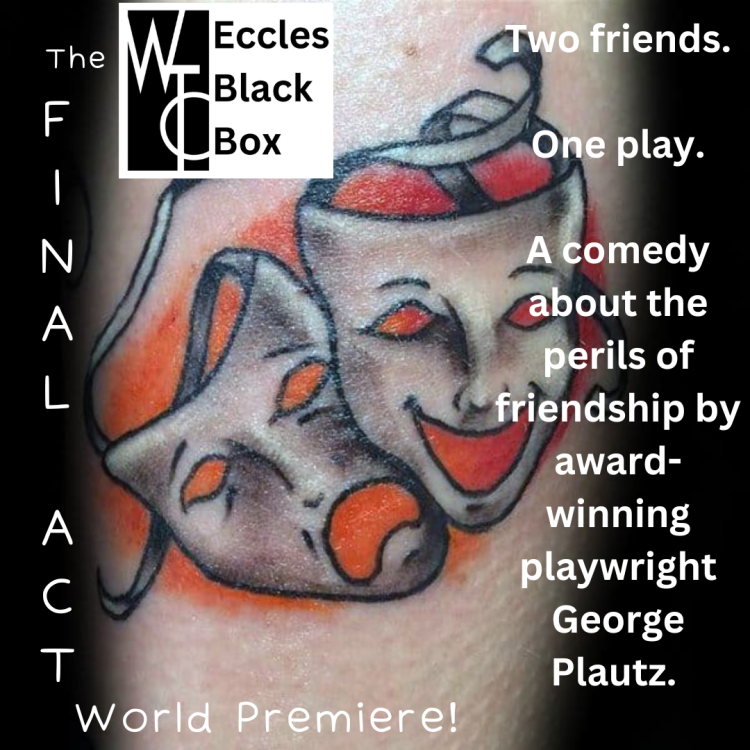 Wasatch Theatre Company continues its 25th season with the world premiere of George Plautz’s THE FINAL ACT.  THE FINAL ACT is a comedy about the perils of friendship and how a group of friends address tests to their friendship.  The show runs February 3-14 at the Regent Street Black Box at The Eccles, located at 144 South Regent Street in downtown Salt Lake.

There is a special two-for-one offer for Valentine’s Day–just enter the code VALENTINE. General ticket prices are $20 a seat.  Student tickets are $15.00.

This show, the fifth in WTC’s ambitious 25th season, is the first in the company’s “Eccles Black Box” offerings.

THE FINAL ACT follows the story of Greg and Ben, two friends from high school who share a theatre tattoo and a general love of all things theatre.  Their friendship is tested when Ben presents a play that shakes Greg’s trust in Ben.  What is a true act of friendship?  Where does friendship start and end?  Parallel to this story is Jen, Greg’s girlfriend, who is struggling to find her own way among this collection of theatre-makers.

George Plautz is a former WTC Board member.  His first show with WTC was as director of THE FANTASTICKS in 2000.  George has since been involved in just about every WTC production except for a brief absence when he taught English in China.  George has had some health challenges of late and has been hospitalized at the Huntsman Cancer Institute since October 2022.  A portion of all ticket sales will go to WTC’s George Plautz Emerging Playwrights Program, which will be used to support the development and production of new plays by local playwrights.

Wasatch Theatre Company is a local theatre organization that has been in operation since 1997. The group has performed at venues such as delis and coffee shops before spending the ten years at The Rose Wagner Performing Arts Building in downtown Salt Lake. WTC most recently spent its full time at The Gateway in a space it opened called The Box and then The Box Too.  Unfortunately, the two spaces closed December 25th because the Planetarium is expanding.