The Story Behind the Gallivan Center’s GLOW Art Installation

If you happened to visit downtown’s Gallivan Center Plaza last winter, you likely came across koro loko, a shimmery, three-dimensional heart sculpture by Utah artist Emily Nicolosi and the In Theory Art Collective. Don’t worry, however, if you missed it. Not only is koro loko back at the Gallivan this winter, but Nicolosi and the Collective made and placed two other pieces on the plaza creating a luminescent three-part installation focused on joy, hope and love called GLOW. 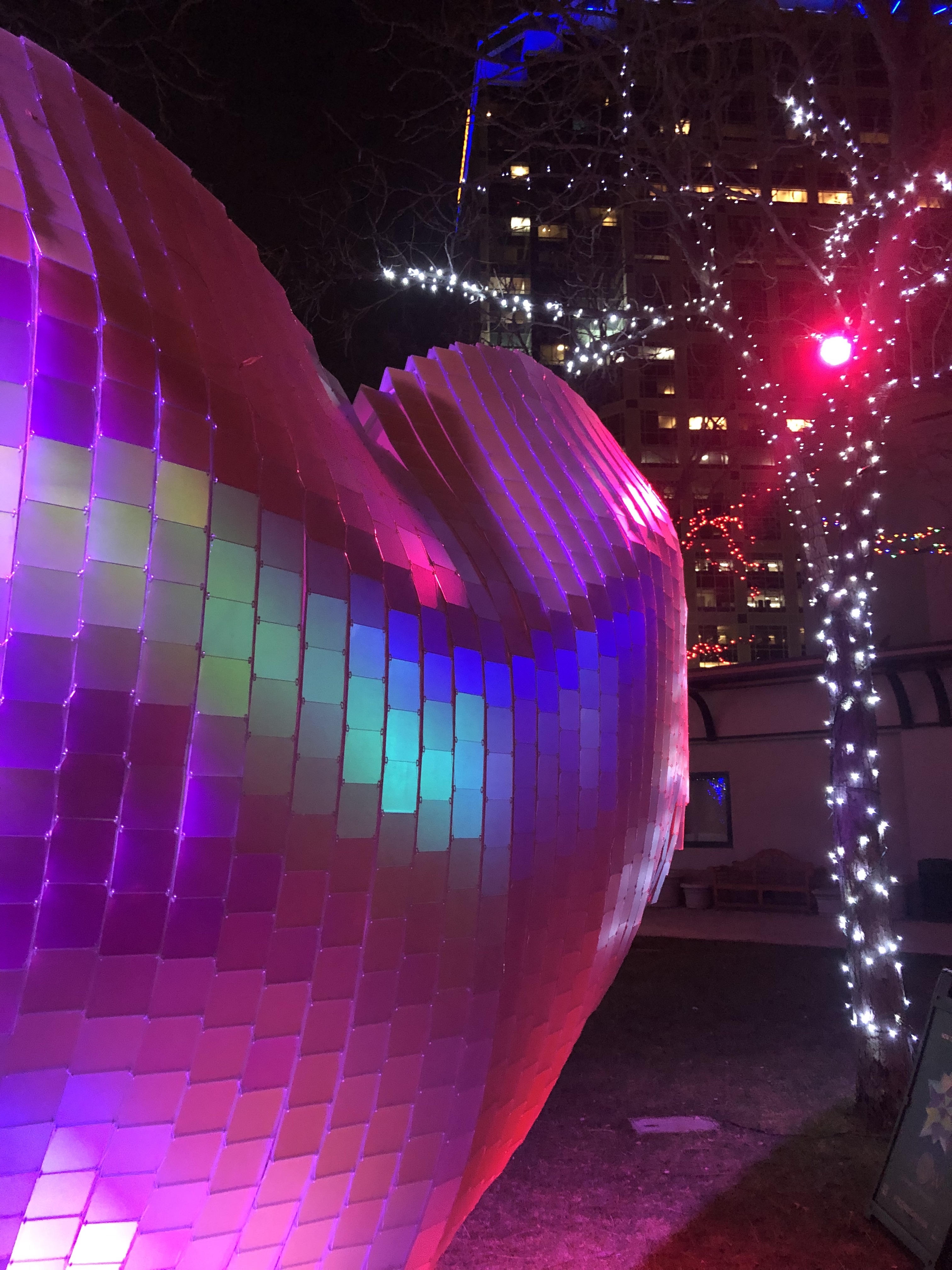 Nicolosi originally conceived koro loko and—along with her husband, Ian Nicolosi, friend Steve Wong and several other members of the In Theory Art Collective—built the heart sculpture to exhibit as part of Burning Man 2019. The response to her plump, luminescent, on-point heart was so positive that Nicolosi decided to find public placement for koro loko following the festival. THE BLOCKS came calling soon after and put koro loko, along with Page Tashner’s Purr Pods, on display at the Gallivan Center as part of its 2020 holiday light displays.

“We saw increased visitation to downtown and to Gallivan because of these great pieces so we knew we wanted to do it again,” says Lucas Goodrich, program director for THE BLOCKS. “So, as we were preparing for this holiday season, we reached out to Emily to ask her to come up with some ideas about how we might augment the already lovely offerings at the Gallivan.”

Nicolosi began by modifying the original koro loko design. “After its first year downtown, I found that the transparent acrylic squares that we used to create it were much better suited for Burning Man’s natural desert environment than downtown Salt Lake’s concrete and buildings,” she says. “We worked with 3form, a local Salt Lake City company, to replace koro loko’s clear squares with a material that’s matte but still iridescent, and that were scraps from 3form’s production process and would have otherwise ended up in the landfill.” 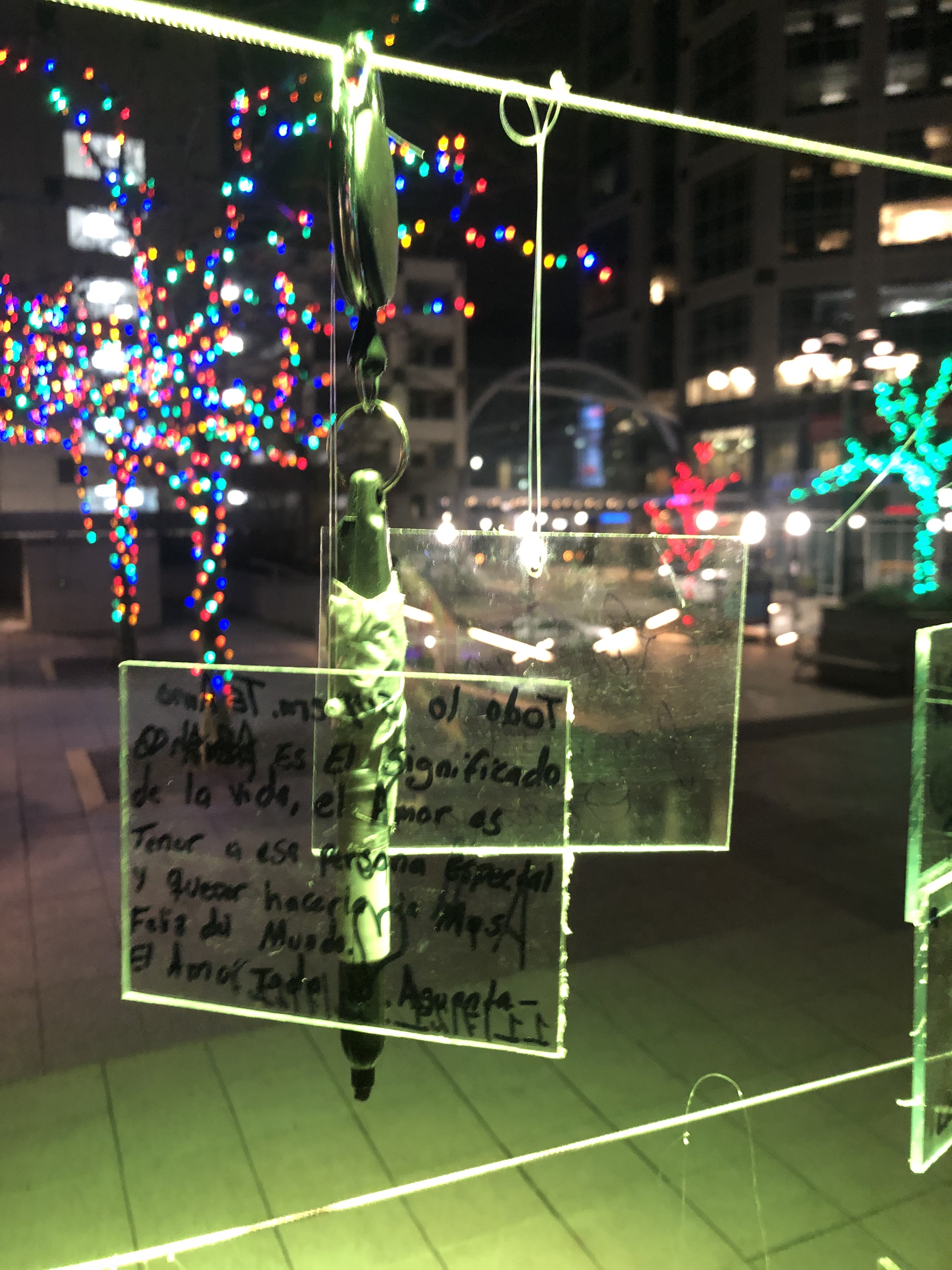 The second piece of GLOW came from an adaptation of an art “concept” Nicolosi and the Collective created at Burning Man called Love is… to “get participants to reflect on the meaning of love,” Nicolosi says. At the Gallivan Plaza pergola, beneath a pink neon sign that reads Love is …, visitors are invited to write their musings on small tags (also upcycled material from 3form) and then tie the tags to wires spanning the space.

The installation’s third piece is Mírí the Wishing Star, a large crystalline star made from the same upcycled iridescent 3form squares Nicolosi used to redo koro loko. Taken from one of the Elvish languages created by J.R.R. Tolkien and used in his novels, The Hobbit and Lord of the Rings, Mírí literally means a precious thing, a gem, a jewel. “Mírí was a piece we’d been thinking about making for a while, but then after I was approached by THE BLOCKS to create this installation, moved it onto the front burner,” Nicolosi says. “It’s about the same thematic idealism of koro loko and Love is … but is also meant to be a space to reflect on our hopes, dreams, and wishes” 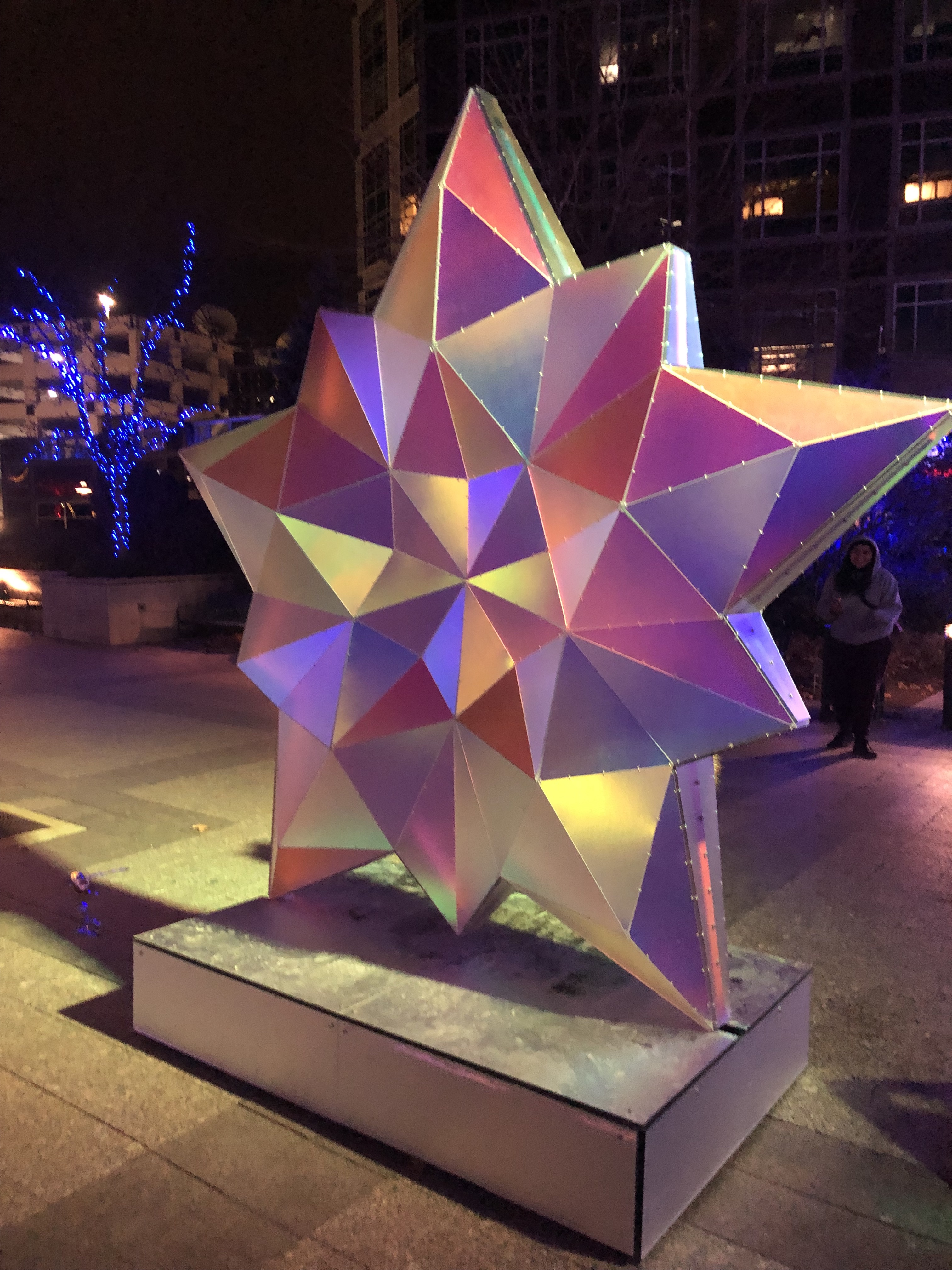 Each of GLOW’s three sculptures utilizes light—both direct and ambient—as part of the artistic design. Seeing them at nighttime, alongside the Gallivan’s thousands of holiday lights and the energy from the reopened ice rink, is when these sculptures are at their most grand presentation. But if you happen to be downtown during the day, be sure to take a moment to stroll through the Gallivan to check out GLOW. “These sculptures take on a different appearance at different times of the day, and so I encourage people to view the pieces both in sunlight and at night,” Nicolosi says.

Beyond its physical presence at the Gallivan Center, Nicolosi would like visitors to help her allow GLOW to live within the virtual sphere as well by tagging photos taken near the GLOW sculptures and posted on social media with @ koro_loko, @project_love_is, or @miri_the_star. “My ultimate hope is that people enjoy the art and that because of it, are able to step out of their day-to-day lives and have a magical moment,” she says.